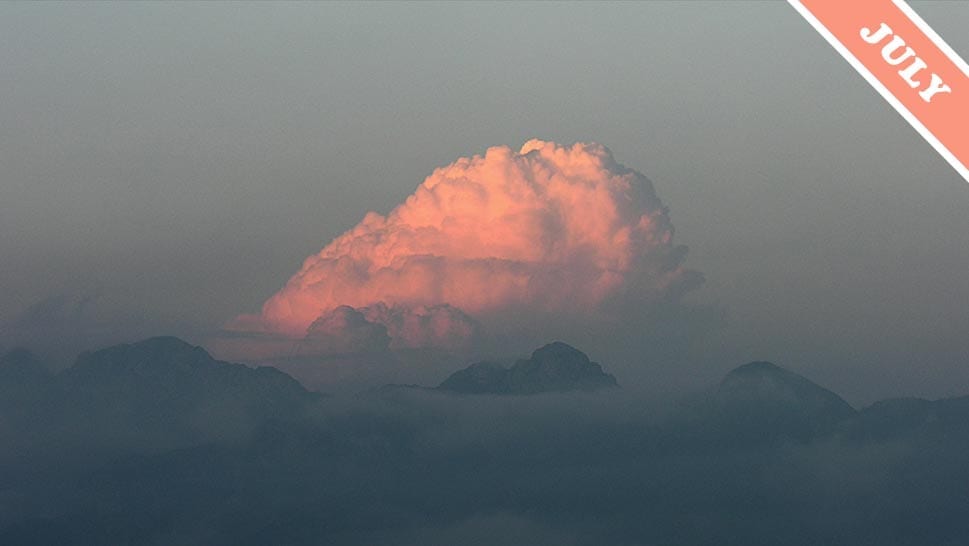 There are few clouds as pleasing to watch develop as the Cumulus congestus. From below, the darkening base of this shower cloud looks ominous and brooding but, from a distance, it has the appearance of a gigantic inflatable creature: its crisp, voluminous shape swelling into the middle atmosphere, as if it is being pumped up, from behind the scenes, by some enormous, invisible dad.

The largest of the four possible species of Cumulus, congestus can develop from the smaller humilis and mediocris species when the atmospheric conditions are ‘unstable’. This means that the way the air temperature changes with altitude tends to encourage the rising column of warm, moist air at the centre of the cloud to keep lifting higher and higher. Such unchecked convection makes the cloud swell to formidable proportions. While it has the same crisp, cauliflower summit as the smaller fair-weather Cumulus, the congestus species is so tall that it readily produces sizeable showers.

This stage of Cumulus growth is when it is at the point of maturing into a different cloud type. Once the top of the cloud begins to ‘glaciate’, its droplets freezing into ice crystals, the crisp, sharp edges of its summit soften and become more blurred. This is the point at which the cloud has officially turned into a Cumulonimbus storm cloud.

Such a fully-fledged storm cloud is the stage in the cloud’s development that tends to get all the attention – what with its heavy downpours, its spreading canopy of ice crystals and dramatic thunder and lightning. But we rather prefer the congestus stage just before it becomes such an ostentatious individual. We like to gaze up and chart the cloud’s progress, blow by blow, as this brother to the fair-weather Cumulus swells into adulthood.