July 10, 2009 In Attention All Cloudspotters 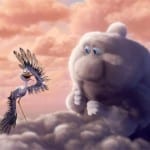 Partly Cloudy is the new short film by Pixar. It was directed by Peter Sohn a Pixar animator who also provided the voice for Emile in Ratatouille.

The story revolves around Gus, a grey cloud who, with the other cloud people, creates the babies that the stork delivers to earth. He specialises in scultping ‘dangerous’ babies and as his creations become more and more lively his stork partner, Peck, has to work harder and harder…