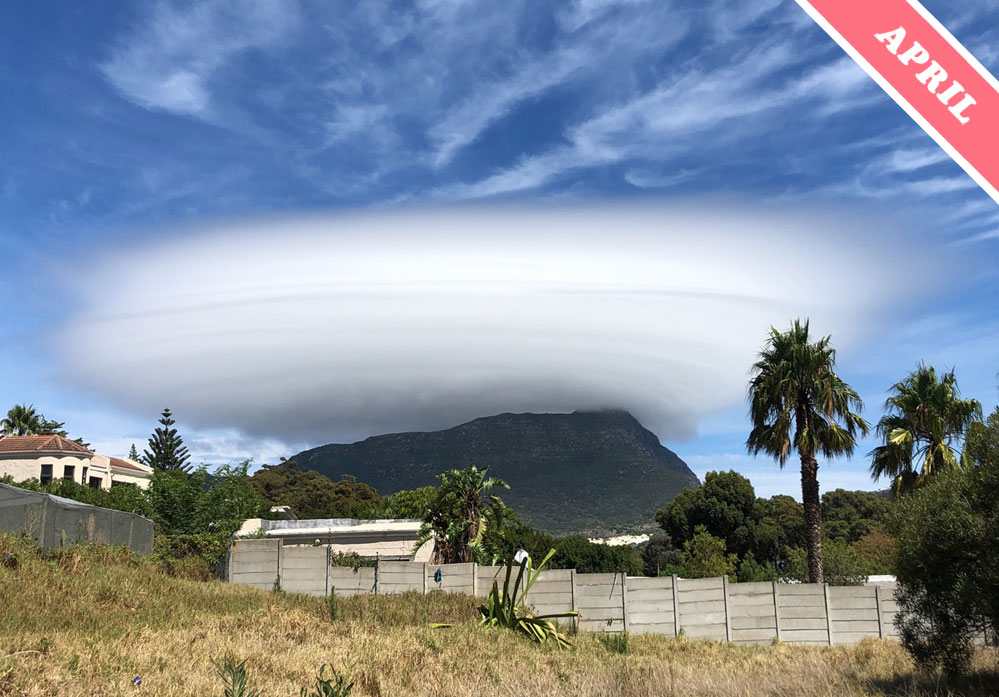 When a smooth cloud appears perched on a mountain peak it’s known as a cap cloud. This mountain headwear is woven by the wind flowing over the terrain. It is a particular type of lenticularis cloud – the disc-shaped cloud named from the Latin for a ‘lentil’ – forming directly on the mountain summit rather than downwind of it where lenticularis more typically appear. The stylish cap shown here was spotted by ‘Poppet’, a user of one of our mobile apps, over the peak of Karbonkelberg, a small mountain in Cape Town, South Africa.

The wind was flowing from the northwest – from right to left in this image – reaching the land after picking up plenty of moisture on its journey over the South Atlantic Ocean. Lifting over the Karbonkelberg peak, the air cooled enough for some of this moisture to condense into droplets that appeared as the disc-shaped cap cloud. The steady winds this day were around 20 mph (30 km/h), but the cap cloud would have stayed put over the peak rather than blowing along with it. Within a cap cloud, the droplets themselves do blow along in the wind – forming at one side where the air lifts up the slopes, travelling in the flow over the peak, then evaporating away at the other end where the air warms as it sinks back down – but you can’t see the droplets, only the cap cloud as a whole. This remains in place, shaped by the airstream rising and dipping like water flowing over a rock in a river.

While Table Mountain creates the most famous of Cape Town’s clouds, the ‘tablecloth’ that can cover its plateau and drape down its slopes, other mountains in the region clearly have their moments to shine. Karbonkelberg steals the show when the wind direction, temperature and moisture content are just right for it to wear a bright white cap that stays effortlessly perched on its summit in the breeze.

A cap cloud spotted by ‘Poppet’ over Karbonkelberg in the Table Mountain National Park, Cape Town, South Africa with Cirrus clouds above.