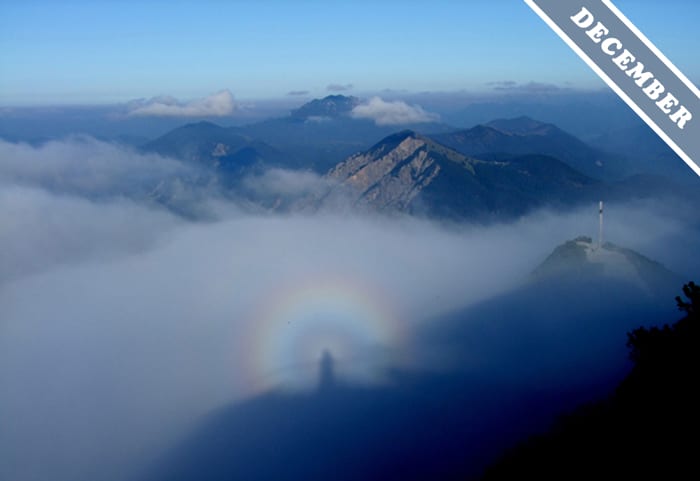 A Glorious Shadow in the Mist

Cloudspotting mountaineers and hill walkers on the Brocken mountain in Northern Germany often find themselves climbing through a bank of stratus cloud to emerge into the sunlight above. At this point, they can sometimes come face to face with a ‘Brocken Spectre’. This fantastical apparition looks like a ghost from the sixties, for it is surrounded by rainbow colours.

The Brocken Spectre we chose for December’s Cloud of the Month was photographed by Martin Tuffner from the Herzogstand mountain in the German Alps. The optical effect is known officially as a glory, and it appears when sunlight from directly behind the observer falls onto a layer of cloud. You need to be looking down onto the cloud for it to work, since the sunlight needs to be coming from directly behind your field of vision. The colours are caused by the light being scattered as it’s reflected back off the tiny droplets of the cloud, but the optics are still only partially understood.

Cloudspotters don’t have to climb the Brocken, the Herzogstand or any other mountain to see a glory. The same optical effect can also be seen from a aircraft window when the aircraft’s shadow is cast onto a cloud layer below.