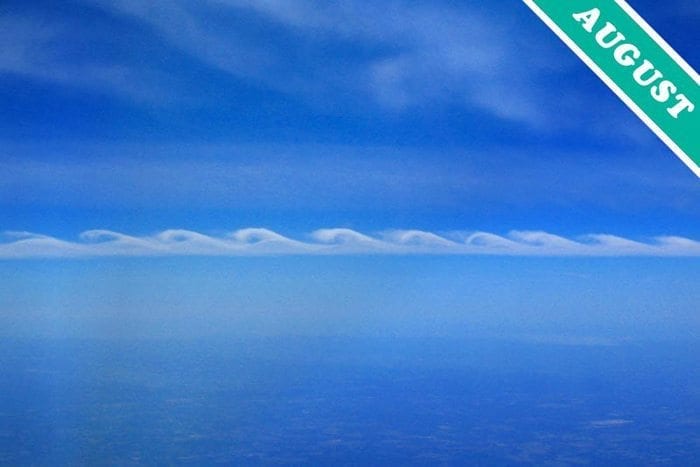 The classic 1964 surfing documentary, The Endless Summer, followed the adventures of three surfers traveling from Malibu to Ghana, via Nigeria, Australia, New Zealand, Tahiti, and Hawaii in search of the perfect wave. Cloudspotters can experience their own perfect wave too, without ever having to leave home – all they need is a lot of patience. The only down side to the ultimate aerial breaker, is that it has the particularly un-hip name of the ‘Kelvin-Helmholtz cloud’.

The breaking waveforms of ‘Kelv-Helmz’ (as they aren’t known) are the result of shearing winds up at cloud level. A particular type of turbulence can develop in a layer of Cirrus cloud, which happens to form below an inversion* between air currents of differing speeds and/or directions. Sea waves break as their bases are slowed down upon reaching shallow water and their crests surge ahead. Cloud waves break in the same way: when their crests are pushed ahead of their troughs by the difference in air currents.

Though spotter-dudes won’t have to cross the world to see this formation, those in search of the perfect Kelvin-Helmholtz will have to wait a while. This most beautiful and transient of formations may appear over most regions of the world but it only ever does so on the rarest of occasions.

*An inversion is a region where air temperatures change with altitude in such a way as to act as an invisible ‘ceiling’ that stops clouds from rising through it.