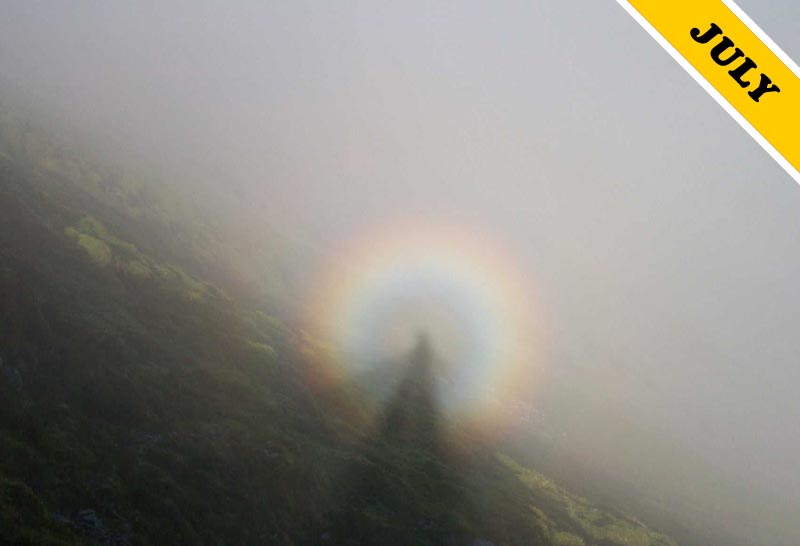 When cloudspotting mountaineers and hill walkers are out on the Brocken mountain, a peak in the Herz range of Northern Germany, they often find themselves climbing through a bank of stratus cloud to emerge into the sunlight above. At this point, they can sometimes come face to face with a ‘Brocken Spectre’. This fantastical apparition is of a ghost-like shadow surrounded by rainbow colours and wearing very flared trousers.

Despite its flower-power appearance, a Brocken Spectre like the one spotted here by Dave Newton in Cumbria, England is not a ghost from the sixties. It is an optical effect that appears as sunlight, coming from directly behind the cloudspotter, falls onto a layer of cloud droplets. This situation tends to occur only on elevated ground, since the cloudspotter needs to be looking down onto the cloud layer, for the Sun to be shining from directly behind him, along his line of vision. The cloudspotter’s shadow, hugely distorted by the effects of perspective, appears in the middle of a halo of colours, which are officially known as a ‘glory’. The exact optics of this effect is still only partially understood.

Of course, cloudspotters don’t have to climb the Brocken mountain to see a Brocken Spectre – any mountain can serve the purpose. Nor is the sight available only to mountain-climbing cloudspotters. The coloured rings of a glory can also be seen around an aircraft’s shadow cast onto a cloud layer below. Is this light effect known as a ‘Boeing Spectre’? No, of course it’s not.