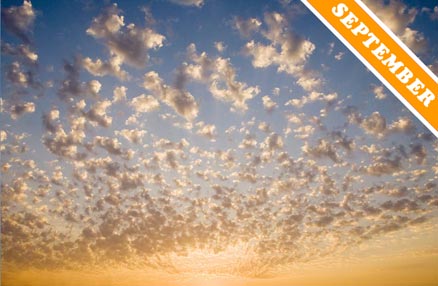 The mid-level cloud known as ‘Altocumulus’ often takes the form of smooth rounded masses that look like a tray of bread rolls. But occasionally, as with the fine specimen shown above, this cloud can have a more ragged appearance with sharp turrets sprouting from its cloudlets. It is then known as Altocumulus ‘castellanus’, since its tops resemble the crenellations of castle battlements. When these airborne defenses proliferate across the morning sky, they suggest meteorological skirmishes to come.

Altocumulus castellanus can appear when the air is ‘unstable’ in the middle of the troposphere (this is the lower part of our atmosphere – in which weather happens). This means that the air temperatures up at that middle level will tend to encourage the vertical growth of clouds. As the sun rises through the day, it can cause low Cumulus to develop on thermals of air floating from the warmed ground. If these Cumulus grow tall enough to reach the unstable air in the mid troposphere, they can continue to build into enormous, fierce Cumulonimbus storm clouds, releasing barrages of hail, thunder and lightning.

With the distant storms still rumbling at day’s end, how obvious it seems in retropect that all those Altocumulus castles could never have have remained at peace.