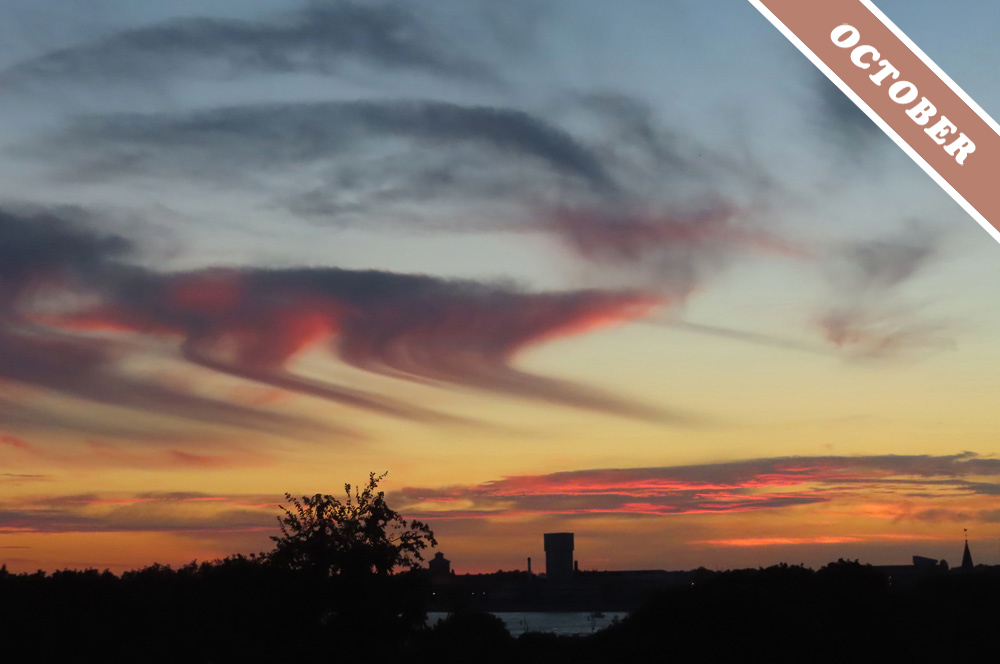 Virga: the showers that could have been

Rain or snow falling from a cloud doesn’t always reach the ground. When the shower is falling from a mid-level clumpy cloud like an Altocumulus it often dissipates into nothing long before touching down. The fading shower appears like a streak dangling from the cloud base, and it is known as the cloud feature virga.

Virga usually starts with supercooled droplets in the cloud freezing into ice crystals and growing large enough to fall. Altocumulus clouds producing virga like these spotted over Portsmouth, Hampshire, England by Linda Holtby (Member 20,966) might be at altitudes of around 5 km (16,500 ft). Up there, the temperature of the cloud droplets might be as low as –18ºC (0ºF) but they can remain in liquid form. This is a supercooled state of water, and it is common up in the atmosphere, where pure water in droplet form at low pressure stays liquid much colder than we are used to down here at ground level. Once a few of the supercooled droplets do eventually freeze into ice crystals these hold onto their water molecules more tightly than the surrounding droplets do. This means the ice crystals grow in size as their droplet neighbours shrink. This is how an abundance of tiny cloud droplets that are easily kept aloft in the winds changes into fewer ice crystals that are large enough to fall through the air, emerging as a streak from the base of the Altocumulus cloud. Why, then, would this shower of ice crystals never make it to the ground?

The ice crystals fade away to nothing if the air below the cloud is dry enough. Well, they don’t actually fade to nothing – the water in fact changes from visible ice crystals into the invisible gas form of water, known as water vapour. They might first melt into droplets and then evaporate into water vapour or if the air beneath the cloud is dry enough they might change directly from visible ice to invisible gas, a process known as ‘sublimation’. Either way, there’s more air to fall through when starting from a mid-level cloud like Altocumulus than when water is falling from a cloud with a low base. This means showers from Altocumulus are more likely to fade away like this before reaching the Earth’s surface than those from clouds with low bases.

The virga spotted here by Linda Holtby have an angled appearance – as if the falling ice crystals took an abrupt change in direction as they descended. This is because of ‘shearing’ winds, where there is an abrupt drop in wind speed a little below the cloud level. The Altocumulus clouds are zipping along in fast winds that are blowing towards the left of the image. A little below the cloud the winds are blowing much slower to the left, and so the ice crystals trail behind as they fall into them, giving the virga an angled appearance.

Virga features demonstrate the ever-shifting transformation of water in our atmosphere, how easily it changes state from visible droplets and ice crystals to invisible gas with just the slightest shift in air temperature or humidity. By revealing water’s eternal dance from visibility to invisibility, these showers-that-could-have-been show all that’s magical about clouds.