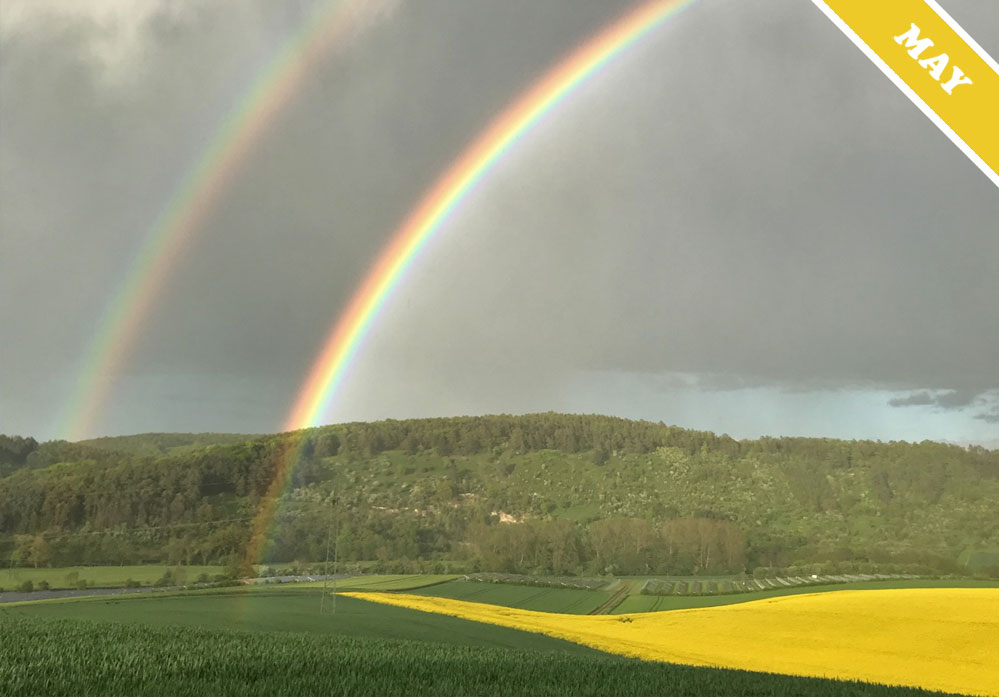 On the Brightness of Rainbows

Have you ever paid close attention to the subtle variations in the brightness of rainbows? If you are prepared to go deep and geeky on this, you’ll find there’s more to rainbows than meets the eye.

Sometimes, rainbows appear in pairs, like this double rainbow spotted by Doris Bordon over Eußenheim, Bavaria, Germany. The inner bow, which we call the primary rainbow, is always brighter than the outer bow, known as the secondary one. Both forms of rainbow appear only when sunlight shines uninterrupted from behind you onto a curtain of rain up ahead. Both arcs are centred on the same ‘anti-solar point’, in the exact opposite direction to the Sun from where you’re looking.

Now observe a little closer. You’ll see that the secondary bow is dimmer than the primary one. This difference is to do with whether the light passing through the falling raindrops reflects back at you having bounced once off their inside backs or twice. Light forming the outer, secondary bow has reflected off two points on the inside backs of the raindrops – like when a pool ball bounces off one cushion then another. Some light is lost at each reflection and so this appears dimmer than light of the primary bow that made just a single reflection. Not only do the bows differ in brightness, their colours are also the opposite way around. The primary bow has red on the outside, while the secondary has red on the inside. This reversal is also the result of whether the light bounced once or twice.

What about the way both bows appear dimmer in front of the hill than they do above it, with the rain cloud behind? This difference in brightness tells us how close the rain shower is. The cloud must be raining over and beyond the hill more than it is in front of it. We know that only some of its shower is falling this side of the hill, and that’s because the brightness at any point along a rainbow depends partly on how many raindrops are present in that part of the sky. Since more raindrops mean more reflection and a brighter bow, we can see that only some of the rain is falling this side of the hill, with the rest falling over it and beyond.

And while we’re geeking out about the brightness of bows, do you notice something curious about the sky on either side of them? The sky between the two bows here is slightly darker than it is on the inside or the outside of them. This effect is known as ‘Alexander’s Dark Band’, after the Ancient Greek philosopher Alexander of Aphrodisias, who in 200AD first wrote about the sky appearing darker between double rainbows. It turns out that the optics decreed that in this part of the sky none of the raindrops reflect light back towards you after bouncing either once or twice off the insides of their backs. By contrast, the raindrops falling in regions of the sky within the primary bow and outside the secondary bow do glint some light at you – just not as much as those where the rainbows are – and so the sky in these parts appears slightly brighter than in Alexander’s reflection-free region band between. We told you it was going to be geeky! As poet Gerard Manley Hopkins observed in an unfinished poem dated 1864, untangling the science behind this most familiar atmospheric light effect was never going to be simple: