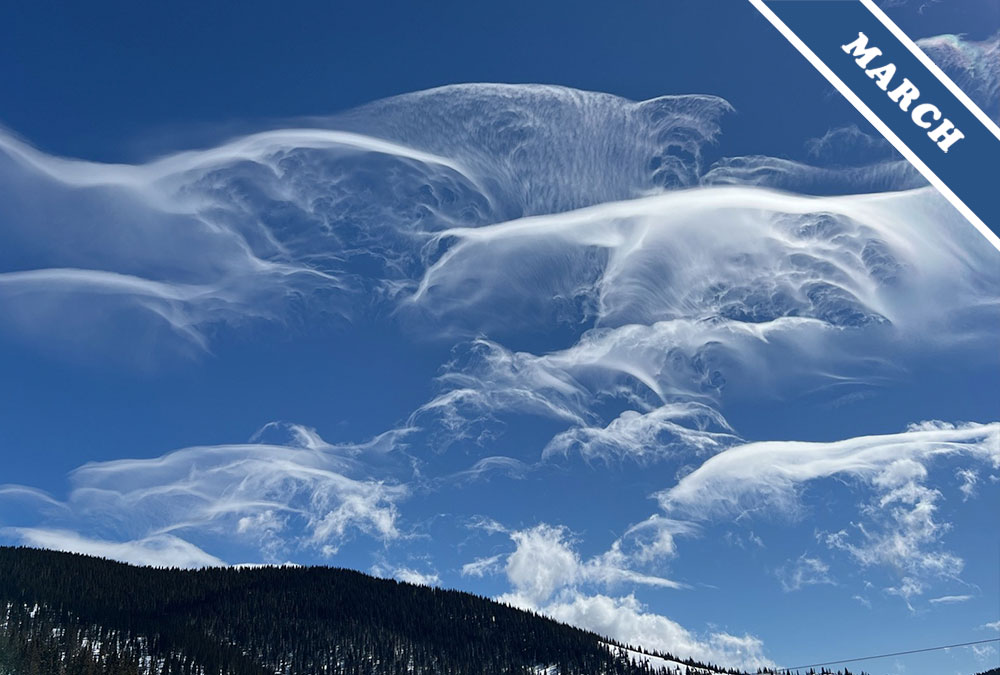 The Eyebrow Cloud That’s Waiting to be Made Official

This cloud formation should have a Latin name, but it is yet to be classed as an official cloud type. It can appear in the turbulent airflows downwind of mountain peaks, and we think it looks like eyebrows in the sky.

This would be a good cloud to be added to the list of types because it has a distinctive appearance that’s easily differentiated from other formations. Also, pilots would likely want it to have a name for practical reasons: so that they can learn to stay well away from it. This cloud reveals where turbulence in the mountain airflow is particularly chaotic and violent, which is where no glider pilot wants to fly.

The turbulence develops as part of the rising and dipping flow of air as winds pass over mountains. Much of the airflow is smooth, rising to pass over the peak and dipping back down again beyond, like water flowing over a rock in a stream. But just as the water flowing in a stream can break and foam at a particular point beyond the obstacle, so can the wave of the airflow break at a particular point downwind of the mountain peak. Where this happens, if it does, depends on the shape of the terrain and the speed of the wind. Often the breaking wave of air is invisible. Sometimes, it produces a churning, roll-like cloud described by pilots as a rotor cloud. Sometimes, when the air tumbles over itself, it makes the distinctive shape of eyebrow clouds.

We’ve had examples of this unnamed formation sent in by members from around the world, including examples over the Sierra Nevada of California, US, the mighty Himalayas of Nepal, and the alpine peaks of Switzerland like The Eiger mountain and The Jungfrau. We even have a Latin name in mind for it. This was suggested to us by Latin scholar Rick LaFleur, Franklin Professor of Classics Emeritus at the University of Georgia, US when we asked him how the Romans would have referred to an eyebrow. Rick suggested the term superciliaris, which is Latin for ‘of, or related to, an eyebrow’.

It’s been a few years since the Cloud Appreciation Society last argued that the official naming system for clouds should have a new classification of cloud added to it. The chaotic, wavy-looking asperitas cloud was eventually accepted as a new cloud type by the World Meteorological Organisation (WMO) after we’d argued the case for it to be given a name. Asperitas was added to the WMO’s official reference work The International Cloud Atlas back in March 2017. That was exactly five years ago this month. Perhaps it’s time to start a new cloud-classification campaign and raise some eyebrows with the superciliaris cloud?