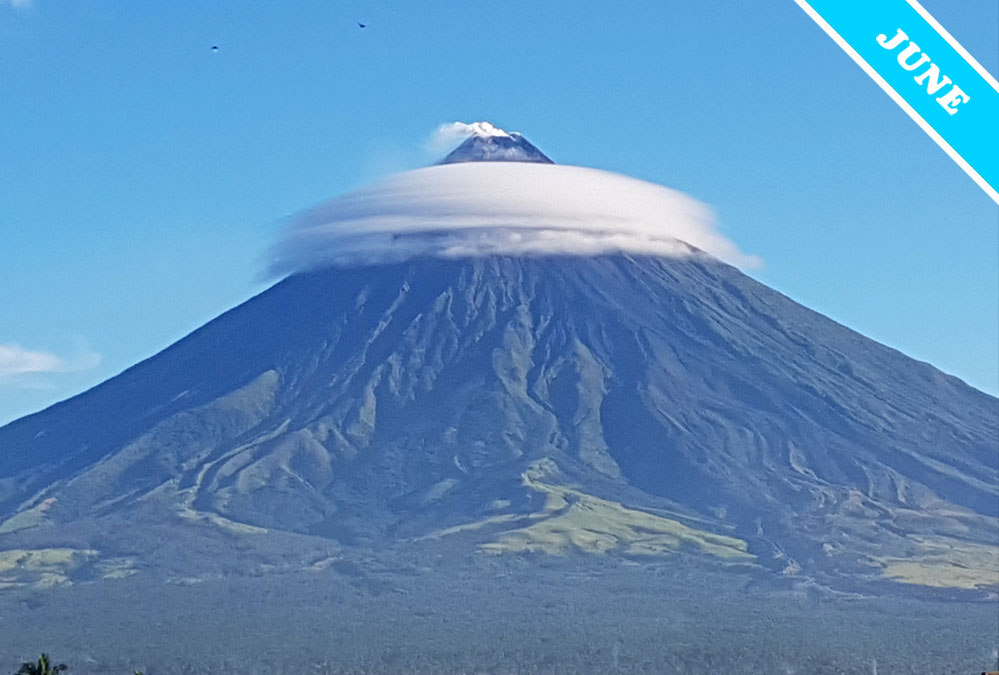 [/vc_column_text][/vc_column][/vc_row][vc_row row_type=”row” use_row_as_full_screen_section=”no” type=”full_width” text_align=”left” css_animation=””][vc_column width=”2/3″][vc_column_text]An ‘orographic’ cloud is one that has formed as a result of the wind rising to pass over and around a hill or mountain. This lifting causes the air to expand and so cool, which can be enough for some of its moisture to condense into droplets. When an orographic cloud takes the form of a smooth disc centred directly on the mountain, it is commonly referred to as a ‘cap cloud’. But that name just doesn’t feel right when it looks like the one spotted by Chito Aguilar over Mayon Volcano in Albay, The Philippines. If it is a cap, the Cloud of the Month for June would seem to have been put on rather too forcefully since the volcano’s summit is poking right through the top. Maybe a ‘collar cloud’ would be a more appropriate name? Or even a ‘cloud ruff’, after those elaborate, uncomfortable collars that were all the rage among Europe’s 17th-Century aristocracy?

An orographic ruff of cloud like this tends to form in high-pressure, or ‘stable’, conditions when air flowing over the mountain is stratified, with a moister layer of air flowing beneath a drier one. In such conditions, the moister layer of air is lifted as it flows up and around the sharp mountain peak, and it cools enough as it does so for some of its moisture to condense into visible droplets, which appear from a distance as the collar of cloud. The drier flow of air above lifts too, but this layer doesn’t produce any droplets, allowing the mountain summit to show. Here the active volcano is producing a helpful plume of ash to show us cloudspotters that the air is flowing from right to left.[/vc_column_text][/vc_column][vc_column width=”1/3″][vc_single_image image=”217349″ img_size=”large” add_caption=”yes” onclick=”link_image” qode_css_animation=””][/vc_column][/vc_row][vc_row row_type=”row” use_row_as_full_screen_section=”no” type=”full_width” text_align=”left” css_animation=””][vc_column][vc_column_text css=”.vc_custom_1498035029943{padding-bottom: 15px !important;}”]A cap cloud – soon to be known around the world as a ‘cloud ruff’ – spotted by Chito Aguilar over Mayon, Albay, The Philippines.[/vc_column_text][/vc_column][/vc_row]