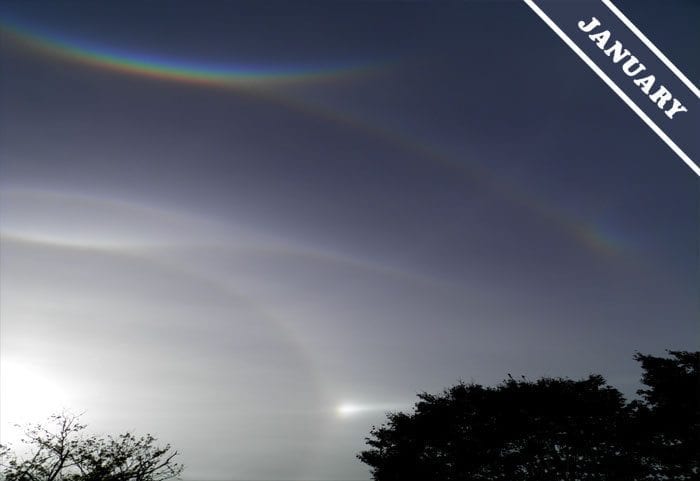 Arcs and Halos over Huntsville, Alabama, US

Very rare arcs and halos appeared at the end of October 2012 as the sunlight shone through the ice crystals of Cirrostratus clouds that had formed around the fringe of superstorm Sandy. ‘Halo phenomena’ like this are sometimes seen as the sunlight is reflected, refracted and diffracted by the tiny particles of ice that make up high clouds or frozen fog, known as diamond dust.

But this display of arcs and rings was different from the usual. In addition to common halo phenomena such as ‘sundogs‘ and the ‘22-degree halo‘, the display included ones that are very rare indeed. With names like the ‘Hastings arc’, the ‘Wegener arc’ and the ‘Parry supralateral arc’, these halo phenomena appearing together in Cirrostratus clouds is a once-in-a-lifetime event. “Everything appeared gradually,” explained Jane George who took this wonderful photograph from Huntsville, Alabama, US. “It started with the standard 22-degree halo and sundogs, and then the rest started to appear over the next hour or two. It was really something.”

You can say that again. Les Cowley, an expert in the optical effects caused by the sunlight passing through clouds (someone’s gotta be!) is an honorary member of the Cloud Appreciation Society. He described the scene captured by Jane as “a truly outstanding – even sublime – display.” That sounds to us like a good Cloud of The Month with which to start 2013!