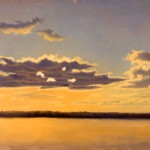 Our American members, and intrepid international travellers, may care to drop in on a cloud-friendly exhibition in the Cape Cod area.

Ten of the works on display are small oil studies of clouds by William Bradford, a New Bedford artist with an international reputation. All of the paintings and photographs are of sea- and skyscapes, primarily of the New Bedford region but with several Arctic scenes as well.

Local members of the National Weather Service helped to identify the cloud formations depicted in the works and the cloud symbols have been incorporated in the labels. A National Oceanic and Atmospheric Administration cloud chart encourages visitors to test their skill at cloud identification.

“Your website, and the Cloudspotter’s Guide by Gavin Pretor-Pinney, have been immeasurably helpful during the planning for this exhibition,” said Madelyn Shaw, the museum’s Vice President for Collections and Exhibitions.