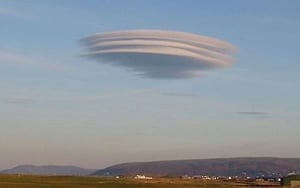 Is it a bird? Is it a plane? No, its an Altocumulus lenticularis.

Read all about it in the UK’s Telegraph newspaper.

A rather more dramatic visitation had arrived the month before in the vicinity of Mt Rainier in Washington State, US. Some photographs of this extra-terrestrial cloud event were sent into the society’s Cloud Gallery (e.g. here and here).

To learn about lenticularis clouds, which is what these were, you might like to look back at the Cloud of the Month for April 2005.