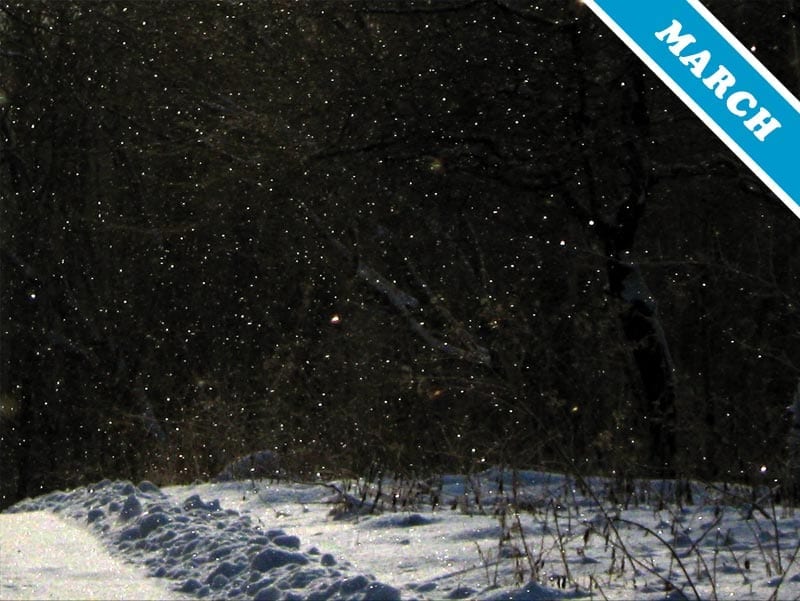 Collections of water droplets that appear as cloud can form at many different altitudes. They often appear down here at ground level, when they are known as fog. But the ice crystals that make up higher clouds are far less common at low altitudes. Few have been lucky enough to see the beautiful ice-crystal equivalent to fog, shown in March’s Cloud of the Month, which goes by the appealing name of ‘diamond dust’.

Diamond dust is rarely thick enough to reduce visibility much. Its presence is then only revealed by the way the ice crystals glint in the light as they tumble through the air, producing a magical sparkling effect. It is sometimes also known as ‘ice fog’, though this term usually refers to a thicker ice-crystal fog. For classic diamond dust to appear, temperatures need to be lower than –20˚C. When the ice crystals grow slowly in such temperatures, they take the form of tiny, regularly shaped hexagonal prisms. As well as glittering, these can also produce some of the most dramatic and beautiful ‘halo phenomena’.

This is the name for the rings, arcs and bands of colour that appear when sunlight is refracted and reflected as it passes through a cloud’s ice crystals. If diamond dust is made of particularly regular crystals, as is often the case in polar regions, it produces better halo phenomena than the high clouds do. But cloudspotters needn’t travel all the way to the Poles to see these light effects. The onset of the skiing season brings diamond-dust observing opportunities much closer to home, for the same tiny ice-crystal prisms often form downwind of snow machines at ski resorts. Just remember to take cover when they do so on a black run. Fellow cloudspotters will be so distracted by the beautiful halo effects that they are bound to be completely out of control.