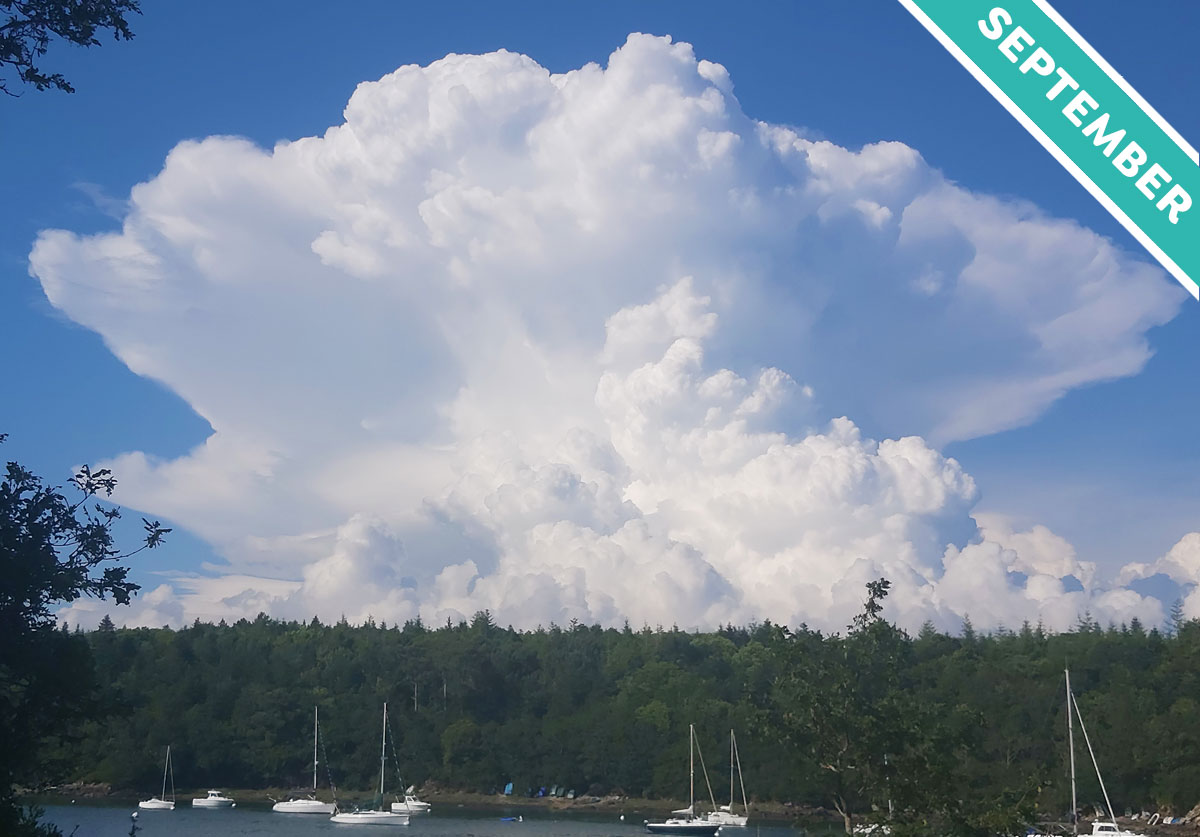 Cumulonimbus: The Cloud with Plenty to Shout About

Of the ten main types of cloud, known as the cloud ‘genera’, the most impressive has to be the Cumulonimbus storm cloud. It stands out from the crowd thanks to its towering height, its often torrential showers, and its ability to summon thunder and lightning.

A Cumulonimbus like this one spotted by Paul Magnin over Benodet, Brittany, France might extend 8 miles (13 km) up into the atmosphere. Such impressive heights cause Cumulonimbus clouds to spread out in broad canopies at the tops. They reach the upper limit of the troposphere, the region of our atmosphere where weather happens. There, the temperature profile of the air acts as an invisible lid on the growth of clouds. Beneath this temperature lid, Cumulonimbus clouds can grow no taller and can only spread out sideways to form this cloud’s distinctive shape, which is often likened to a blacksmith’s anvil.

The precipitation falling beneath a Cumulonimbus also singles it out from all the other cloud genera. The storm cloud unleashes showers far heavier than any other type. And these showers can be made of hail when the cloud’s powerful rising and sinking air currents coordinate to lift its falling precipitation back up to its freezing summit over and over, causing the ice to build in layers and the hail stones to grow larger and larger.

Lightning results from the collision of ice crystals within the churning air currents of a Cumulonimbus. As they bump into each other in the cloud, the larger pieces of ice pick up electrons from the smaller crystals. Being heavier, the larger pieces fall through the cloud’s rising air currents to find themselves nearer the base while the smaller ice crystals are light enough to be easily blown upwards by them and swept towards the cloud’s summit. This separation of electric charge can build and build until a lightning bolt discharges a huge current of electricity to redistribute it. Cumulonimbus is the only cloud to create lightning, and it certainly doesn’t keep this a secret. Each of the cloud’s bolts heats the air to 10,000ºC (18,000ºF) causing it to expand explosively down its length. These explosions we hear as the crash and boom of thunder.

We can thank the mighty Cumulonimbus for the phrase ‘on cloud nine’. When the ten cloud genera were first listed in The International Cloud Atlas, an 1896 reference manual on cloud identification, Cumulonimbus appeared ninth in the list. To be on cloud nine, therefore, is to be riding the tallest of all the clouds.