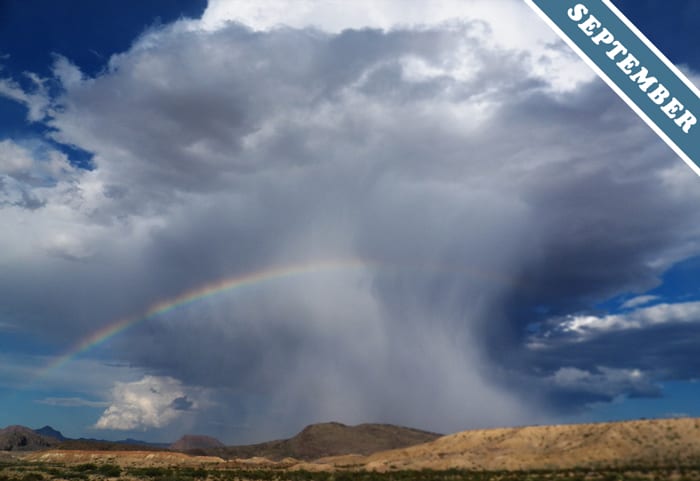 A Rainbow from the King of Clouds

September is a big month for the Cloud Appreciation Society, as we are holding our ten-year anniversary event in London. So for this Cloud of the Month we’ve chosen a big cloud. The mighty Cumulonimbus is the breeder of thunder, lightning and hail. It often spreads out at the top in an enormous canopy, which is called an incus after the Latin for a blacksmith’s ‘anvil’. This enormous mountain of the atmosphere can reach ten miles (16 km) up into the sky.

Down beneath a Cumulonimbus, on the other hand, is not such a happy place to be. This is where the storm is raging, with fierce gusty winds and heavy downpours. These clouds can also sometimes join forces, becoming coordinated into enormous and destructive multi-cell storm systems. Each Cumulonimbus acts as an individual storm cell, with the growth of one cloud feeding into that of the next.

On other occasions, they just form in isolation – like this one photographed by Frann Brothers over Terlingua, Texas, US. It is not releasing a barrage of punishing hail, just a heavy but harmless rain shower. And as the unbroken sunlight shines onto its curtain of precipitation, this glorious King of Clouds is even displaying a ten-year-celebration rainbow.