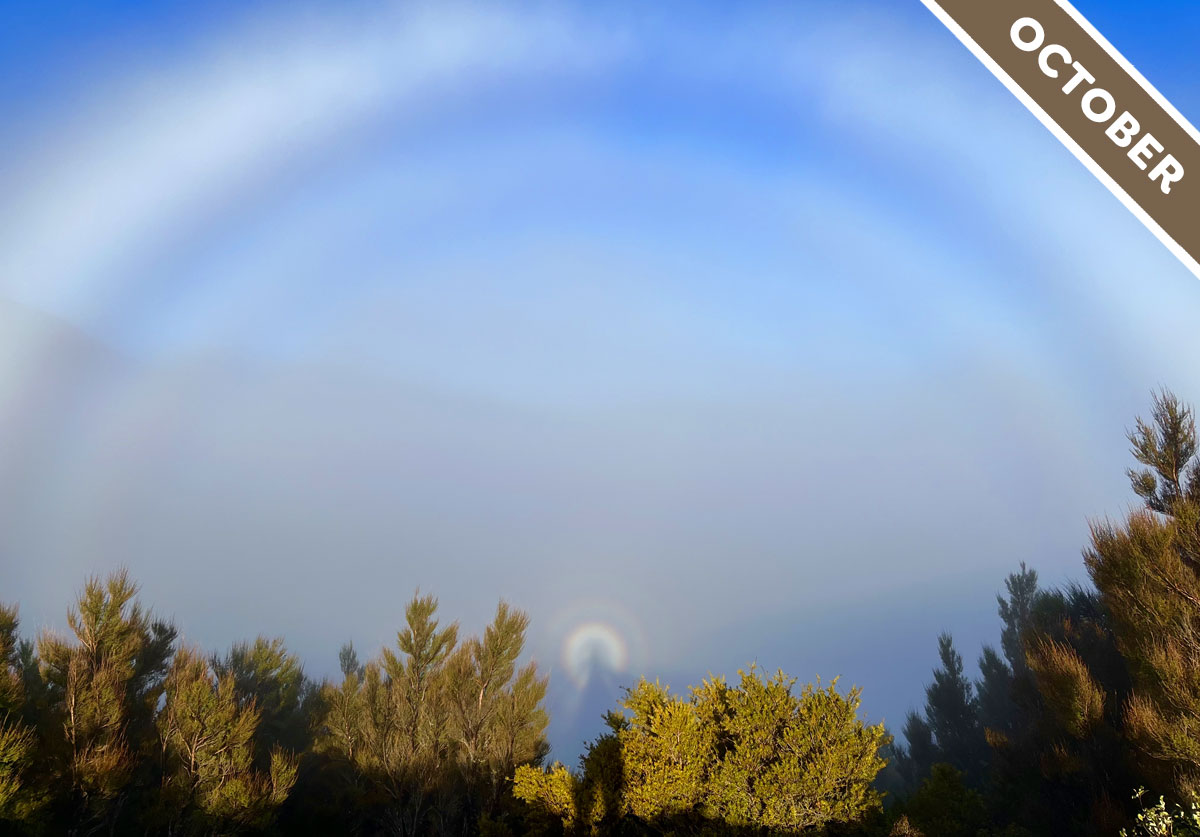 A Fogbow and a Glory haunt the mountains of New Zealand

When direct sunlight shines onto fine droplets of fog, ghostly optical phenomena known as fogbows and glories can appear. Both optical effects emerged together when Leo Gundle (Member 59,048) was hiking towards the end of the day on Mount Fyffe, South Island, New Zealand. One of them looked like the ghost of a rainbow. The other, like a shadowy figure crowned with bright rings of colour.

The fogbow is the broad and diffuse arc stretching from one side of Leo’s photograph to the other. As its name suggests, this effect is like a rainbow formed by fog droplets rather than raindrops. Just like a rainbow, a fogbow appears when direct sunlight shining from behind the viewer reflects back off water particles in the air. But a fogbow has far paler colours than a rainbow – in fact often, like in Leo’s example, it has no colours at all. A fogbow is also much more blurred than a rainbow and typically shows some broad bright and dark bows inside the main one. These differences result from the fact that fog droplets are much, much smaller than raindrops – often just 1/100th of a millimetre across compared to the 2 mm or so of an average raindrop. The tiny droplets, being closer in size to the wavelengths of visible light, have the effect of bending and scattering the light waves by an optical process known as diffraction. The scattering effect is much more pronounced when the water is in tiny droplets rather than larger drops. It has the effect of blurring the bow so its colours blend together and appear white, and also of broadening the bow. Diffraction of light also causes bright and dark arcs within the main bow. These are the broad, blurry, fogbow equivalents of the fine fringes of colour, called supernumerary bows, that sometimes appear on the inner edges of rainbows.

In addition to the fogbow, Leo also spotted the most ghostly of all optical effects: a glory. This appeared as a series of coloured rings around the head of Leo’s shadow as it fell on the mountain fog. This optical effect can appear a little alarming to a hill or mountain walker, due to the unexpected combination of a shadow appearing distorted by perspective as it is cast onto the fog layer below and the bright multi-hued rings centred around the shadow’s head. The effect became known in the Victorian era as a ‘Brocken spectre,’ named after the Brocken Mountain in Germany, where it was often spotted. Glories result from the same diffraction effect that small droplets have on light waves.

For the arc of a fogbow to look bright and the rings of colour in a glory at its centre to appear vibrant and defined, the tiny droplets in the fog need to be all of a similar size. Differently sized droplets won’t scatter the light in a way that adds up to produce pronounced fogbows and glories. The best are more likely, therefore, when fog is dissipating away, thinning into a mist, as its droplets all shrink and end up at about the size just before they evaporate away completely. “As I walked along the ridge line,” Leo Gundle remembers of this day, “the eerie fogbow and Brocken spectre followed me, until the mist descended with the cooling evening.”

A glory and a fogbow caused by mountain fog spotted over Mount Fyffe in the Seaward Kaikōura Range on South Island, New Zealand by Leo Gundle (Member 59,048).