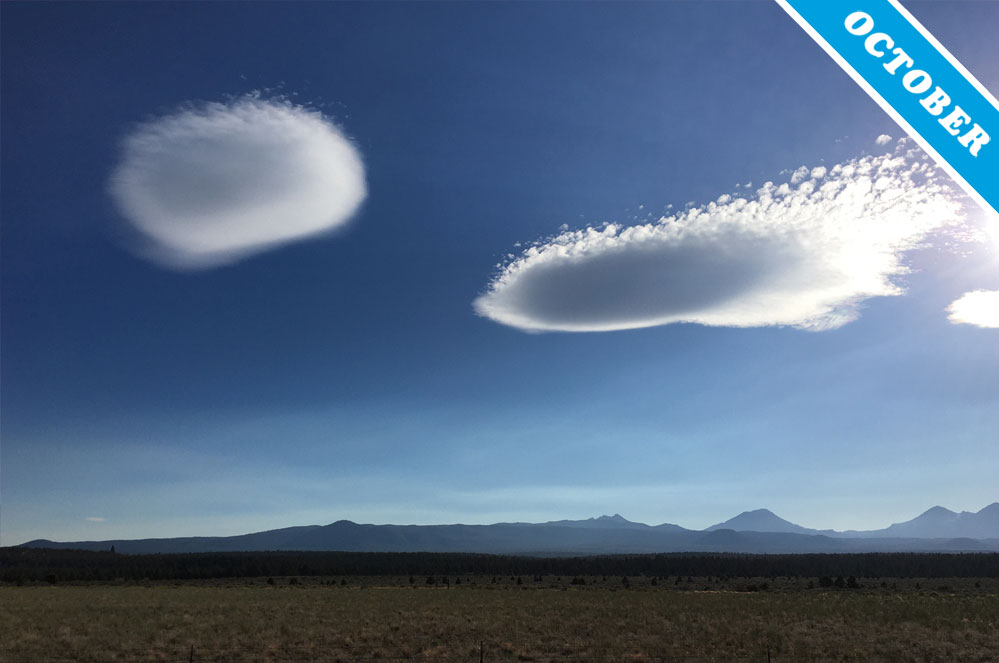 The name for a lenticularis cloud comes from the Latin for ‘a lentil’. This is because of the formation’s distinctive disk-like shape. The ones spotted here by Lee FitzGerald (Member 50,400) over Bend, Oregon, US are mid-level examples, which would therefore be known more fully as Altocumulus lenticularis, and they’ve been cooked up by those mountains in the distance.

Visible on the western horizon is the Cascade Mountain Range, over which is blowing a steady wind carrying moisture it picked up out in the Pacific. This wind is being kicked upwards as it flows eastward over the mountains, the airflow developing into a wavelike path, rising and dipping in the lee of the Cascades. Though the airflow is invisible, the crests of its waves are revealed by the appearance of lenticularis clouds. Their water droplets form at the peaks where the air cools enough for its moisture to condense into droplets that persist only briefly before the air dips back down again, warms, and they evaporate away.

Though the lentil-inspired name for this cloud comes from its overall shape, sometimes parts of a lenticularis can appear broken into smaller scattered cloudlets like the ones spotted here by Lee. The effect looks like someone spilt a whole bowl of lentils, and it reveals an even subtler shift of temperatures within the flow. Each forming droplet releases a tiny amount of heat into the surrounding air as it appears. This slight warming happens whenever water condenses into droplets. The combined effect can sometimes be enough to cause parts of the airflow to lift in pockets, causing parts of the lenticularis disk to be broken up into individual cloud grains. Or would they be pulses? Either way, this lentil-within-lentil dish is surely soul food for any cloudspotter.