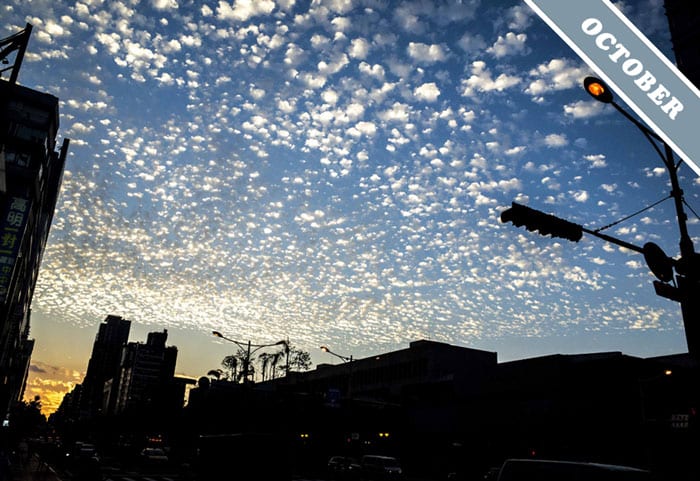 An Orderly Flock in the Sky

Regularity in the natural world always feels surprising to us – the uniform hexagon formations of honeycombs, the intricate fractal swirls of ferns, a regular pattern of clouds. It as if someone has imposed order onto the chaos of nature. Perhaps this is why the regular arrangement of ‘cloudlets’ in a layer of Altocumulus cloud, like this one photographed by Po-wan Ko (Member 39,254) over Taipei, Taiwan, feels so striking. We know that clouds are shaped by the unruly, swirling currents of the atmosphere and yet these fleecy clumps appear to have been arranged in a neat and orderly array. But this regularity is simply a pattern that can emerge from the laws of nature, and it is one that you can reproduce with an experiment in your own kitchen.

First, this is what is happening in the sky when a cloud like this forms. The air is slightly unstable over a large swathe of the sky, which means that warmer, less dense air below starts to float upwards into cooler, denser air above. But here is the thing: the air below can’t float up en masse because some of the cooler air also needs to sink down to replace it. The rising and falling air currents therefore arrange themselves into ‘convection cells’, with the warmer air rising in pockets as the cooler air sinks down around them. Cloudlets form in the pockets of rising, warmer air. Clear boundaries remain in the fringes around these convection cells where the cooler air is sinking down to replace it.

Shallow convection cells like this (they are known as ‘Rayleigh-Bénard convection cells’) can be created at home using a sandwich toaster and some oil. First mix some mica powder into some sunflower oil. The sparkle of this fine powder, which is used to add shimmer to paints and cosmetics, makes the movement of the oil visible. Now, with the toaster cool and turned off, pour a shallow layer of the oil mixture (say, 2mm deep) onto the bottom plate of the sandwich toaster. You’ll need a toaster with a slight lip around the plate so that the oil is contained. Turn the toaster on for about 10 seconds and then off again so that it begins to warm the oil gently from below.

It doesn’t need to get particularly hot. Soon you should start to see a neat arrangement of convection cells begin to appear in the oil. You might need to give it a couple more 10-second bursts of gentle heating to warm the oil enough to start the rising and falling motion that arranges itself into a regular array of Reyleigh-Bénard convection cells. The shallow layer of oil, when warmed from below, forms rising cells surrounded by sinking fringes, just as the air in a layer of Altocumulus arranges itself into rising cells of cloud surrounded by sinking fringes of clear sky.