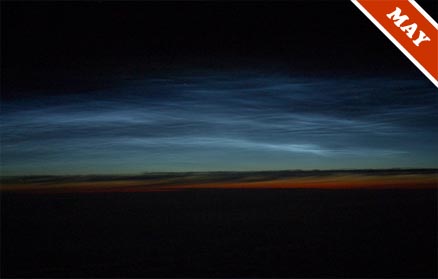 As darkness falls on anything but the brightest of nights, those clouds still awake will appear dark in the night sky as they are cast in the Earth’s shadow. But one rather mysterious cloud refuses to go to bed with the others. ‘Noctilucent’ clouds form so high up in the atmosphere that sun catches them even in the dead of night.

Most clouds form in the lower region of the atmosphere, from the ground to around 8-10 miles up, known as the troposphere. Noctilucent clouds, however, form at altitudes of between 30 and 50 miles, where temperatures can be as low as -125°C. This is a region called the mesosphere – the one above the stratosphere – and is extremely dry, making the appearance of the Noctilucent cloud’s ice crystals somewhat of a mystery. The clouds have a bluish white colour, with a rippled or undulating appearance, as can be seen in the handsome specimen above. They are most readily observed in the higher-latitude regions of the world – those above 50° – within a month or so of mid-summer.

There have been an increasing number and extent of Noctilucent cloud observations over the last 100 years. Some scientists think that this is an indication of man’s contribution to global warning. Increases in the amounts of greenhouse gases in the stratosphere will not only warm the atmosphere below, but will also cool those regions above. Colder temperatures in the mesosphere would be expected to encourage the formation of Noctilucent clouds. Could the increasing observation of this insomniac cloud be the writing across the night sky of our role in changing the climate?