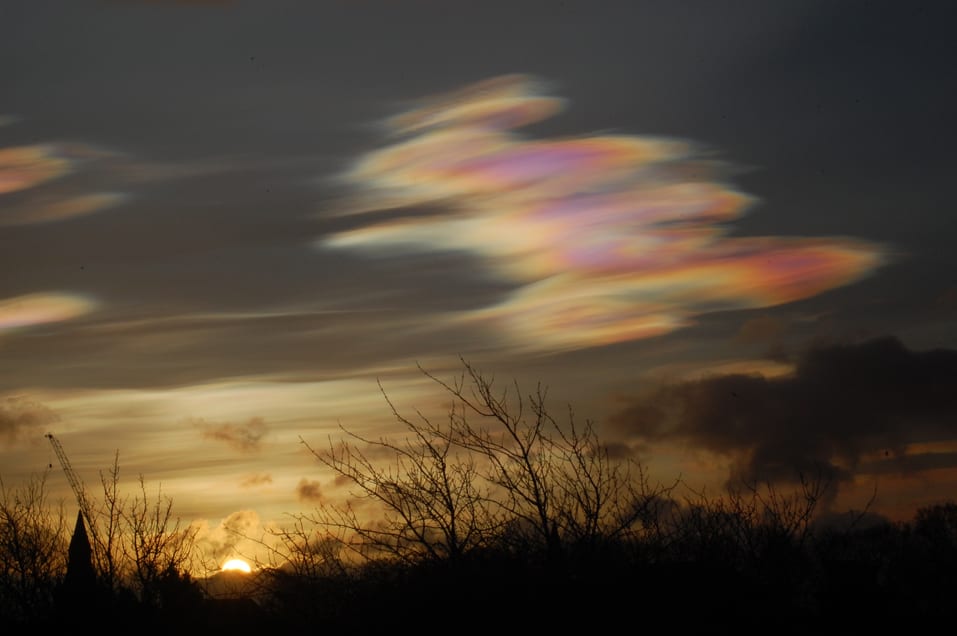 [vc_row row_type=”row” use_row_as_full_screen_section=”no” type=”full_width” text_align=”left” css_animation=””][vc_column][vc_column_text]Cloudspotters across the UK and Ireland have witnessed fantastic displays of rare ‘nacreous’ clouds over the first few days of February. The formations are also known as ‘mother of pearl clouds’ due to their beautiful bands of colour, which appear as the cloud’s ice crystals diffract the sunlight, separating it into its different wavelengths. While iridescent colours are seen in many cloud formations, they tend to look much more dramatic in nacreous formations because this cloud’s tiny ice crystals are very regular in size.

Officially known as polar stratospheric clouds, nacreous are typically only observed close to polar regions. They form much higher than most clouds – at altitudes of 10-15 miles (15-25 km), within the stratosphere. They’re only ever observed in winter, when moisture from the troposphere, the lower region of the atmosphere where weather happens, is lifted up into the stratosphere.

The Atlantic storm Henry that passed over Scotland on the 1st and 2nd of February might have contributed to lifting the moisture for these displays. But particularly low temperatures in the stratosphere over the UK have caused the perfect conditions for nacreous clouds. Cold stratospheric air that usually circulates around polar regions, known as the ‘stratospheric polar vortex’, has recently been displaced southwards to extend over the parts of the UK. It has resulted in a nacreous-cloud bonanza for British and Irish cloudspotters. Many fantastic photographs from this sighting have been added to the gallery.[/vc_column_text][vc_empty_space][/vc_column][/vc_row][vc_row row_type=”row” use_row_as_full_screen_section=”no” type=”full_width” text_align=”left” css_animation=””][vc_column][/vc_column][/vc_row]

9 thoughts on “Nacreous clouds over Britain”