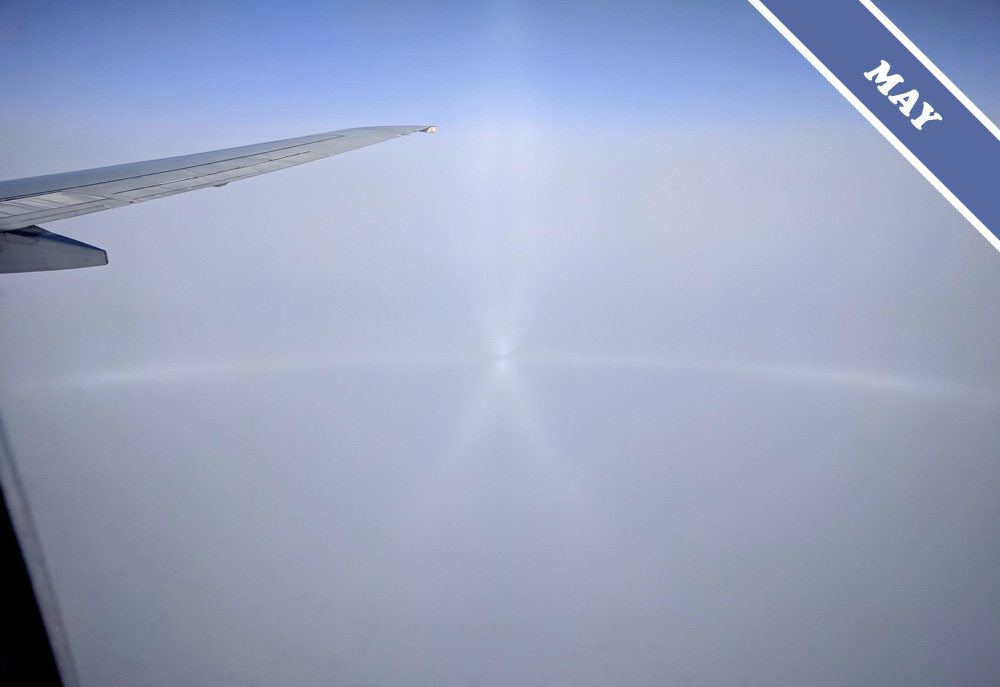 Cloud of the Month for May, which was spotted from the window of an aircraft, is a pattern of optical effects that looks like a ribbon of light tied up in a bow. It was noticed by Ross McLaughlin on a flight over Oslo, Norway. The delicate arcs and loops of light are formed by the complex reflection and refraction of the Sun’s rays as they shine through the tiny ice crystals of Cirrostratus cloud beneath the aircraft. The view here was looking away from the direction of the Sun, with the pattern of arcs centred on the ‘antisolar point’, the spot diametrically opposite the position of the Sun. Since the Sun was above the horizon, this particular arrangement of light effects was only visible because Ross’s view was looking downwards onto the cloud’s ice crystals. Just visible within the central knot of the ribbon of light is the faint shadow of the aircraft itself.

Known collectively as ‘halo phenomena’, ice-induced optical effects such as these tend to have exotic-sounding names. The line arching horizontally across the sky is known as a ‘subparhelic circle’. The loop at the top of the ribbon’s bow consists of ‘diffuse arcs’. The pair of tails hanging beneath the knot are called a ‘Parry antisolar arc’. The last of these, rarest of the three, only appears when ice crystals within a cloud have a very particular shape and orientation. They need to be transparent, hexagonal columns of ice arranged horizontally as they fall through the sky and oriented, like pencils laid out on a table, with one of their sides facing directly downwards. Only this particular arrangement, of this particular shape of ice crystal, viewed from this particular angle, will ensure that a Parry antisolar arc can appear as the tails of the ribbon of this rare and delicately knotted bow of light. Consider it a gift passed silently to anyone wise enough to have chosen the window seat.