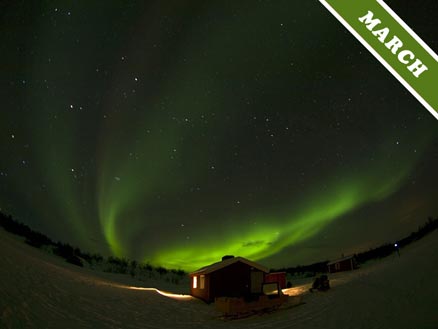 (Click image to enlarge) Photographed over Karasjok, Norway © Mark Humpage.
See another of his photographs in the Cloud Gallery here.

As any astronomer will tell you, clouds are certainly not limited to the Earth’s atmosphere. There are many different types of cloud to be found in space. This month’s Cloud of The Month is a break from the norm. It shows the Northern Lights, or Aurora Borealis, which are the effects on our atmosphere of a cloud that reaches us from the Sun.

The immense explosions and flares on the Sun’s surface throw out ‘plasma clouds’ of charged particles, such as electrons, protons and ions. These travel at speeds of around a million miles per hour (400km/s). In spite of moving so fast, they still take up to three days to reach us from the Sun.

The plasma clouds themselves are invisible. But we can see their effects as they come colliding into the Earth’s upper atmosphere. When enough of the charged particles arrive, they cause a ‘magnetic storm’ and interact with the atmospheric gases to release energy in the form of light. This is what causes the beautiful and elusive aurora colours in the Northern and Southern Hemispheres.

Cloud Appreciation Society Member, Mark Humpage, recently travelled to Norway to view this amazing phenomenon. You can read about his exploits here: markhumpage.blogspot.com.

Mark tells us that the Vikings thought the Northern Lights were the contrails of Thor’s chariot being pulled by three goats. This sounds no less believable to us than magnetic storms caused by million-mile-an-hour plasma clouds.