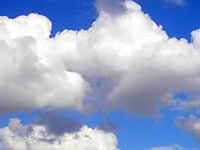 Do microbes make their home in clouds?

Life has been found in some unlikely places on this planet of ours, from permafrost in polar regions to black smoker vents on the ocean floor.

Now it seems there is startling evidence that clouds are also home to a range of tiny organisms.

It has been known for some time that bacteria, algae and fungi can be found in clouds and are often transported long distances. But recent research claims that some hardy bacteria actually live there, feeding on nutrients in cloud water. They grow, metabolise and reproduce, until falling back to earth when it rains.

This raises further fascinating questions: such as whether some microbes have evolved specifically to live in clouds; and whether they contribute to the formation of clouds as water droplets cling to them.

You can read more about this here. Our thanks to Dell Hollingsworth for spotting the New York Times article.