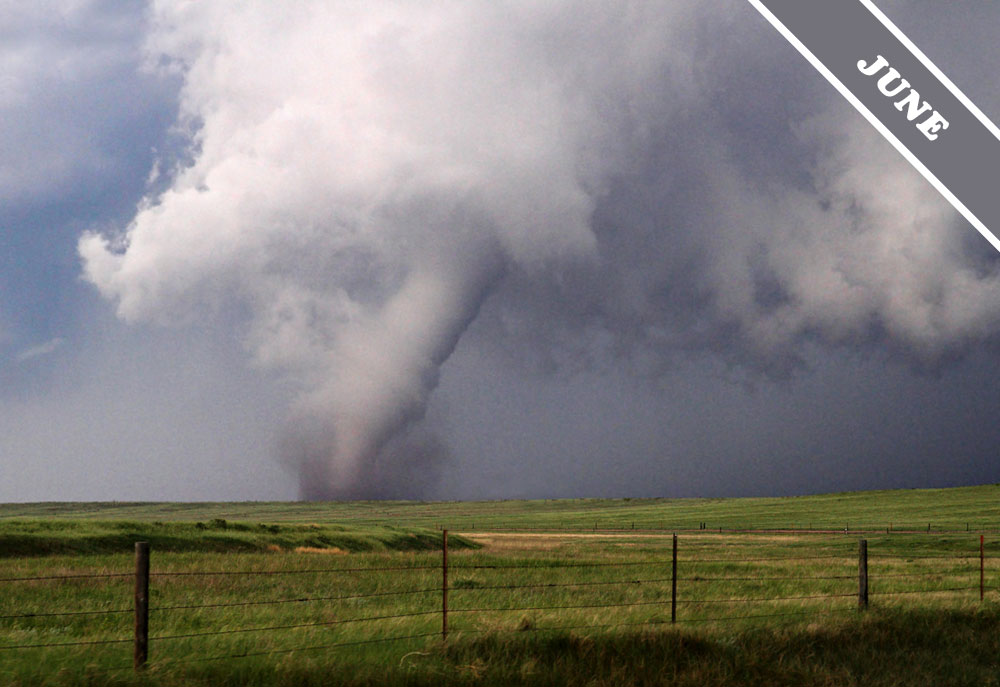 The Physics of Spin

Our atmosphere is always in a spin. Air rotates throughout it, and at all scales, from cyclones that stretch across continents to tiny swirls of dust ribboning over sun-baked roads. June is the month when such rotations can turn nasty in the rising heat of the south-central states of the US. It is the start of tornado season in that region, and it is why we have chosen a tornado over Hereford, Colorado, US, spotted by Pat Gaines (Member 42,499), as the Cloud of the Month for June.

Understanding how tornadoes develop is a challenge. Huge swirling vortices of air, with winds that can exceed speeds of 200 mph (320km/h), are not the easiest environments for cool-headed scientific enquiry. But we do know that tornados tend to occur beneath those most fierce of cloud systems known as supercell storms. These are where the flow of air in to and out of the enormous storm become choreographed into a ferocious rotating dance. This is unlike the more typical pattern for a storm, in which successive Cumulonimbus cells rise to prominence one after another. In a supercell, the whole system develops into a coordinated, deep and persistent rotating updraft called a ‘mesocyclone’.

Such a storm tends to produce a particular cloud feature at its base. It is known as a wall cloud, more officially a ‘murus’, and it is a wide mass of cloud with a very ragged base that extends down from the storm in the region free of precipitation towards the rear. Pat Gaines’s image shows the wall cloud as the cloud feature filling up the top half of the image. This is the part to watch. It is where tornados are spawned.[/vc_column_text][/vc_column][/vc_row][vc_row row_type=”row” use_row_as_full_screen_section=”no” type=”full_width” text_align=”left” background_animation=”none” css_animation=””][vc_column width=”1/2″][vc_column_text]One will start as a cone-shaped protrusion, known as a funnel cloud, on the base of the murus. This extending funnel marks where the rotating energy of the storm has become particularly intense and localised. It emerges out of a complex interaction between swirling inflows of warm air sucked from the rear of the storm and twisting outflows of cool air dragged down by the precipitation towards the front. Spin begets spin, and like a twisting ice skater drawing in her hands the wind speeds increase as the rotating energy of the storm becomes focussed and the funnel cloud touches down to the surface as a tornado.

The wall cloud of a supercell storm forming a tornado, spotted over Hereford, Colorado, US by Pat Gaines (Member 42,499).[/vc_column_text][/vc_column][vc_column width=”1/2″][vc_video link=”https://www.youtube.com/watch?v=e2wbn3ivHwc”][vc_empty_space height=”25px”][vc_column_text]Scientists are only beginning to understand the intricacies of tornado formation. One way that they are doing so is by simulating supercell storms on super computers, as explained in this fantastic video interview by storm chaser Hank Schymer with atmospheric scientist Dr Leigh Orf.[/vc_column_text][/vc_column][/vc_row]