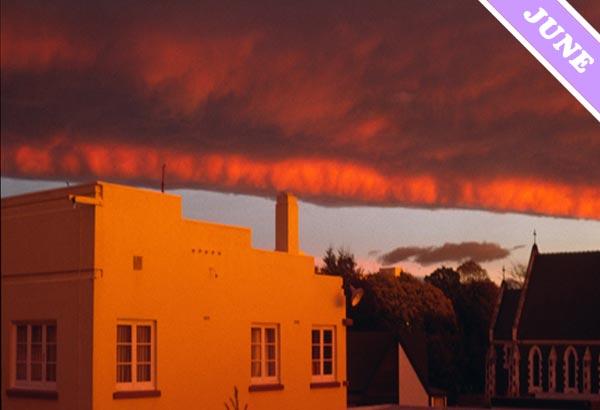 There is a strong northwesterly wind that blows across New Zealand’s South Island which is said to have a disturbing effect on the local population.

The Nor’wester, as it is known, sends temperatures soaring as it sweeps across the Canterbury Plains and has been statistically linked to increases in suicide and domestic violence. Some people feel elated when the dry, hot air hits, but most feel depressed, irritable and drained of energy.

However The Nor’wester also brings with it one of the rarities of the skies, a cloud with its own name. The Nor’west Arch is a distinctive altocumulus formation which partly takes its name from the wind that hurries it along and partly from its shape, because it appears as an arch of high white cloud in an otherwise clear blue sky. It is also often referred to as the Canterbury Arch.

This weather pattern is peculiar to the South Island’s east coast. Warm moist air from over the Tasman Sea is pushed up by the Southern Alps, causing it to cool rapidly, and much of the moisture is dumped on the west coast. As the air passes over the alps, the water vapour remaining becomes visible in a band of cloud over the mountains at the top of each wave of air. To a viewer on the eastern side, this appears as an arch of cloud.

The standing wave of The Nor’west Arch is caused by the moisture condensing and becoming visible towards the top of the wave and then evaporating again as the air descends to the trough of the wave.

Let’s hope this impressive sight helps lift the depression caused by the fiery blasts that accompany it.