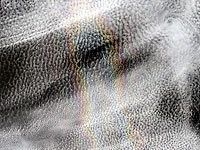 The glory snapped by a NASA satellite
over the Pacific © NASA

If you were lucky enough to be off the coast of Mexico last month, you might have been treated to a spectacular optical effect known as a glory.

A glory is a ring-shaped, rainbow-like phenomenon caused by the scattering of sunlight by a cloud made of water droplets that are all roughly the same size.

One of the rings of the glory which appeared over the Pacific on May 28 was about 60 kilometres wide.

Unfortunately, you would have to have been above cloud level to see it. Luckily for us, NASA’s Aqua satellite happened to be passing at the time, 700 kilometres up, and snapped this picture on the right.