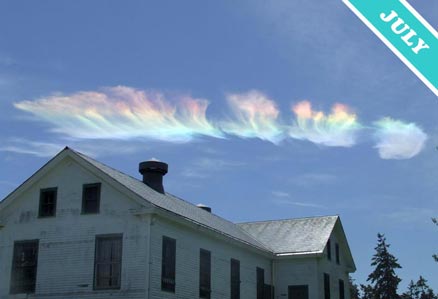 The ‘summertime halo’, the ‘fire rainbow’, the ‘circumhorizon’ or the ‘circumhorizontal arc’… Whichever of its names you decide call it, this enormous, rare, pastel-coloured optical effect will only appear up in the sky when several different factors happen to occur at the same moment.

Firstly, there needs to be the right sort of cloud around, for this is one of the many ‘halo phenomena’ that can only appear as the light shines through ice-crystal clouds, such as this fine Cirrus. The sun also has to be high in the sky (hence the ‘summertime’ name); in fact, it needs to be at least 58° above the horizon (hence the ‘horizon’ name).

In order to refract the high sunlight in the right way, the ice crystals that make up the Cirrus cloud must be shaped like microscopic hexagonal plates. They must also be aligned more or less horizontally (hence the ‘horizontal’ name), for the colours are formed as light rays enter the clear crystals through a vertical side face and exit through their flat bases. So long as the crystals don’t wobble too much in the wind, the 90˚ inclination of these two sides results in pure rainbow-like colours. When the crystal alignment is just right, the entire cirrus cloud shines like a flaming rainbow (hence the ‘rainbow’ name, even though it is not, of course, a rainbow at all).

While most halos can be observed over any parts of the planet, this one is generally found only in those countries that lie below 55° latitude. North and south of this, the sun never rises above 57.8° in the sky. (That said, you might still be able to see the summertime halo in higher-latitude countries so long as you manage to climb a high mountain just as all the other requirements happened to coincide.)

Another example of the summertime halo was spotted by 11-year-old cloudspotter, Hugo, and can be seen in the gallery pages here.

Not only does this rare phenomenon have more than its fair share of names, it is also very beautiful. So while we are at it, why don’t we also start calling it the ‘beautiful arc’, the ‘arc of lovely colours’ and the ‘really rather delightful-looking halo’?