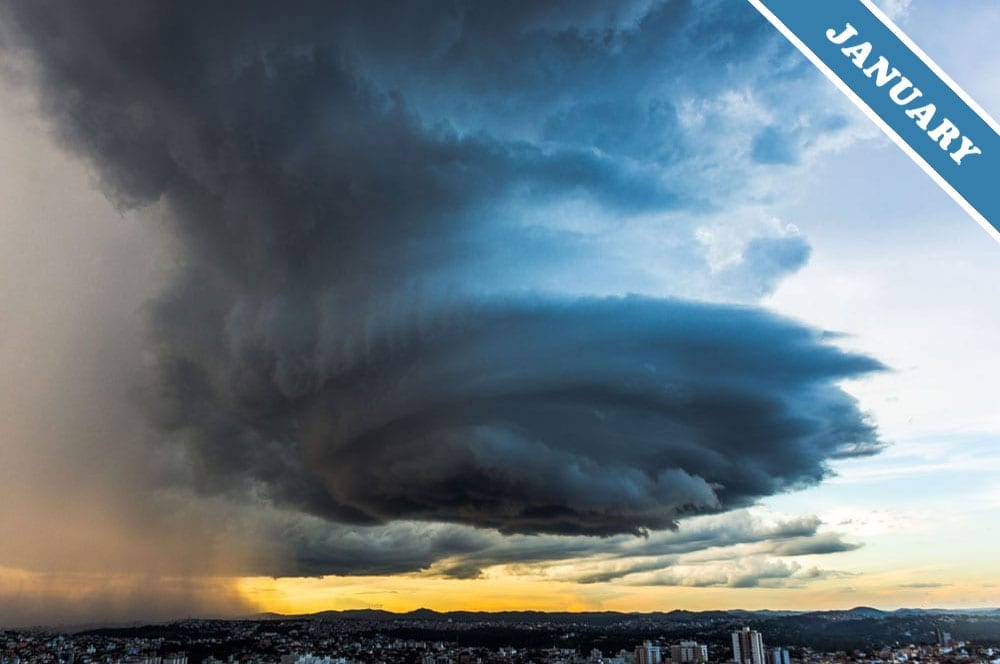 A Twisting Queen of Clouds

The Cloud of the Month for January is a storm feature known as a mesocyclone. It was spotted over Belo Horizonte in Brazil by Guilherme Schild (Member 36,137). A mesocyclone is a huge rotating column of cloud, usually 3–10km (2–6 miles) across, that marks the mighty churning belly of a supercell storm.

This is a Cumulonimbus cloud that has developed into a massive storm system as airflows coordinate and organise themselves in a way that intensifies its growth. In a supercell storm, the differing flow of winds high above and down near the ground conspire to set up a large-scale rotation of the up-rushing air at the storm’s core. Think of it as an upside-down version of water spinning down a plughole – but on a rather grander scale! The shearing pattern of winds sets up a spin that adds energy to the massive updrafts at the heart of the cloud. While the flow of water down a plughole is driven by gravity, the rush of air within the storm comes from buoyancy as the air is heated by the warmth of the Earth’s surface. This buoyancy is boosted when the air’s moisture condenses into the droplets we see as the column of cloud. Each tiny droplet releases a little heat as it forms – this happens whenever any gas, such as water vapour, condenses into liquid, like water droplets. The effect as billions of droplets form is to warm the air more, further fuelling its rush up into the middle of the cloud. Soon, the huge corral of building cloud, rotating air, inflow and outflow, can arrange itself into an enormous coordinated system: a supercell storm.

You can see off to the left of Guilherme’s image streaks of precipitation trailing to the ground. That is where the air rushes down with the rain or hail that is falling from the cold elevations above. No precipitation falls from the mesocyclone, since this is where the storm is sucking air in from all around to feed its relentless growth. Instead, the mesocyclone is where tornadoes are born. The first sign of one is a finger of cloud, known as a tuba, emerging tentatively from the storm’s dark, turning base.

Cumulonimbus are the royalty of the cloud world. And a mighty supercell storm, bearing nascent tornadoes in its mesocyclone womb, has to be the queen of them all.