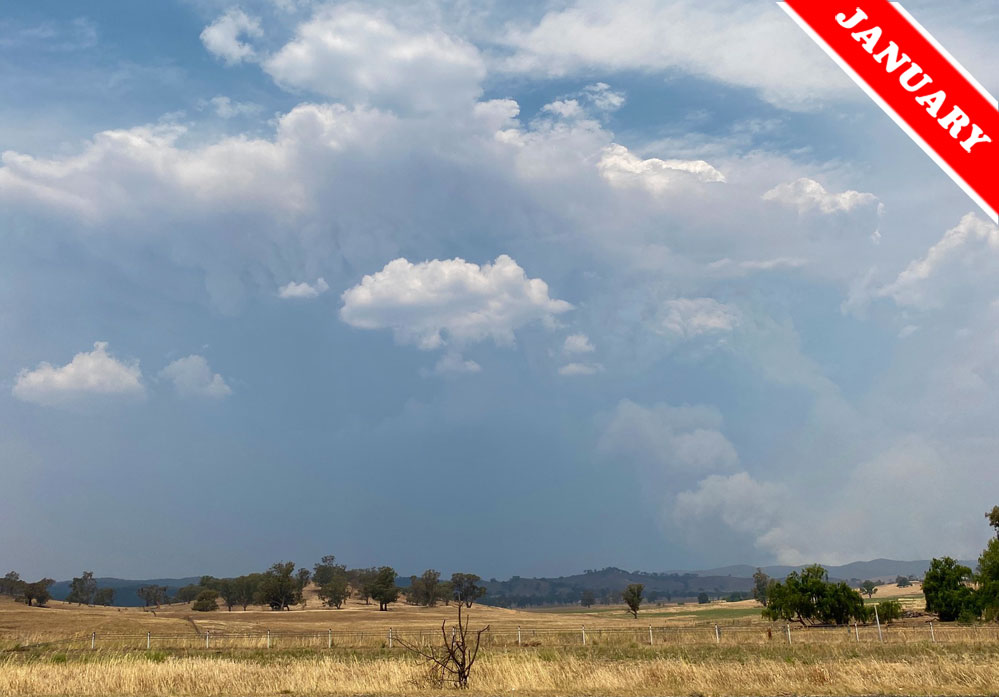 The pyrocumulonimbus cloud is a kind of storm cloud that develops over huge wildfires. It is spawned in the acrid, gusting convection that rushes up above soaring flames, lifted by the violent buoyancy as the air expands in all the heat. This is no cloud to be gazed up at in appreciation, but instead one to be feared. The pyrocumulonimbus was responsible for exacerbating and spreading many of the wildfires that ravaged regions of California, US in past years and, more recently, the huge swathes of parched vegetation across Australia in December and January. The results of these wildfires have been tragic for the people and the wildlife of these regions.

Since clouds are made of water droplets, you might think it is surprising that they should form in response to extreme heat of forest fires within extremely dry regions of the world. Viewing the fires from a distance, the plumes look at first to be just an acrid mix of smoke and ash. But large fires produce clouds that contain huge quantities of water droplets. Water is one of the gases given off by the combustion process. When even the driest, most parched of vegetation burns, H2O is produced as a hot, invisible gas. This ‘water vapour’ soars upwards above wildfire, rushing aloft within the buoyant air. As it rises, the air cools because it expands. And this is what can cause the gaseous water to condense into droplets that make up the pyrocumulonimbus storm cloud.

The massive abundance of smoke particles thrown up along with the water vapour, ensures there are plenty of tiny nuclei present in the air to serve as seeds onto which the droplets can start to condense. Cooling, moisture-laden air freighted with plenty of tiny smoke particles is in fact an ideal set-up for a cloud to develop. It starts as a white summit of pyrocumulus cloud appearing onto the darker column of smoke below, and it soon develops into monster. The cloud growth, already strong in the unstable environment above the fierce heat, gains extra impetus with the condensation of each tiny droplet of water on a smoke particle because the change of water from a gas into a liquid always releases some heat. This is the secret that turns the building cloud from just a simple, acrid mixture of water and smoke into the huge, towering pyrocumulonimbus.

This time-lapse video of a pyrocumulus developing into a pyrocumulonimbus storm cloud was filmed near Inglewood, Queensland, Australia in 2016 by Nicholas McCarthy. It shows how the white cloud of droplets starts to form over the rising column of smoke, and then spreads out at the top as it develops into a pyrocumulonimbus which eventually lead to showers and lightning.

Pyrocumulonimbus clouds can reach many miles up in to the sky and spread outwards at the top. In this sense, they are like natural Cumulonimbus storm clouds. And while they don’t necessarily produce precipitation like Cumulonimbus do, they can result in hail that is often blackened by the presence of all the soot and ash. Pyrocumulonimbus contribute to the spread of wildfires both because their gusty, fierce and variable winds transport the flames and embers and because the larger examples often produce lightning. This can start new outbreaks of fire in regions far from the main blaze.

Our thoughts go out to all those in Australia and the Pacific Northwest of the US whose lives have been affected by the relentless spread of wildfires. We don’t appreciate all clouds alike, and right now pyrocumulonimbus have to be just about the least appreciated of all the formations.