June 9, 2008 In Attention All Cloudspotters 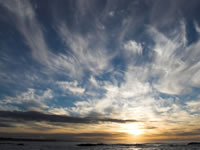 Cirrus clouds are performing a disappearing act which is taking scientists by surprise.

In the global warming debate, it is assumed that temperature rises will lead to more rainfall, which in turn will see an increase in high-altitude cloud cover that will trap infrared heat.

But research on tropical climate systems has found the opposite is happening, with cirrus clouds thinning as the air warms, leading to rapid cooling as infrared heat escapes from the atmosphere to outer space.

Read more about the research here.