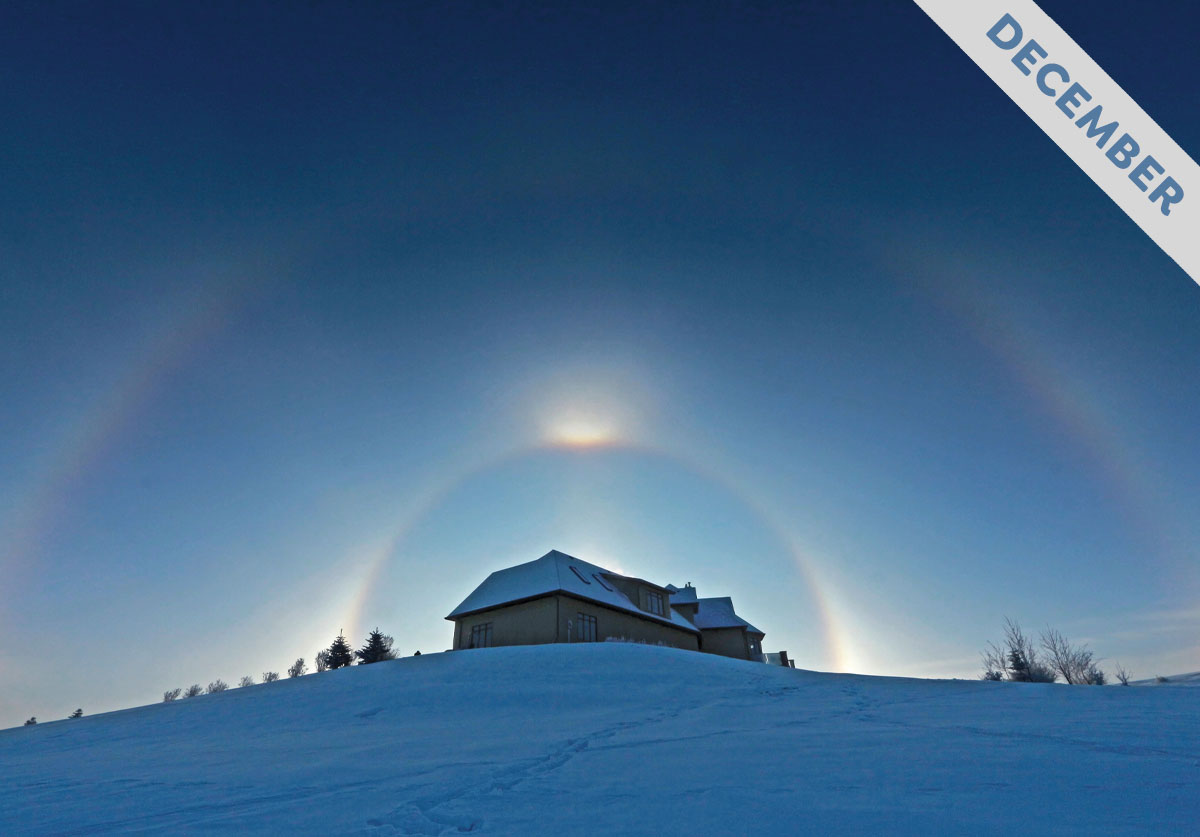 When the air down near the ground has chilled over a particularly cold, dry, and clear night, tiny ice crystals can form in the air in a mist that glitters in the morning sunlight. The morning rays sparkle as they reflect off the surfaces of the tiny tumbling ice crystals, which is why this optical effect is known as diamond dust. But the sparkles are just the beginning when it comes to the many optical effects that can be caused by sunlight shining through this subtle ice fog.

If it develops in very cold and dry conditions, the minuscule crystals in diamond dust can form with great optical purity and precise hexagonal prism shapes. If these ice crystal shapes are in the form of simple hexagonal columns and plates, they can bend, or refract, the sunlight shining through them to produce a whole range of arcs, rings and spots of light, known collectively as halo phenomena. And these are what Tracy Hindle (Member 50,415) saw early one morning in Calgary, Alberta, Canada, as she stepped out of her house.

“I was getting ready to go to work and had just backed my car out of the garage,” she told us. “I was so excited when I saw these ice halos I drove my car back in. It was -25 degrees Celsius, so I put on all my winter gear and headed down the steep hill. The diamond dust looked like someone had sprinkled extra fine craft glitter in the air.”

Each of the different light effects that Tracy spotted has a name. These can also appear when the ice crystals are way in the sky, within the subtle ice crystal layer cloud, Cirrostratus. Some of the optical effects are quite common. The perfect circular ring around the Sun, for instance, is actually more common in many parts of the world than rainbows. It is called a 22-degree halo, after the angle between the Sun in the middle and the ring of light. Point one arm at the Sun and the other at any point on the halo and your two arms will be at an angle of 22 degrees. This is formed by hexagonal columns of ice, shaped like tiny unsharpened pencils, tumbling in all orientations within the gentle eddies of the morning air. Also common are the sundogs, the spots of light on either side of the Sun and an upper tangent arc appearing directly above it. Both are formed as the sunlight shines through crystals shaped like tiny hexagonal plates all arranged in a horizontal orientation. The plate-shaped crystals can be naturally aligned by the air resistance as they fall like autumn leaves.

These optical effects are caused by the sunlight shining through hexagonal plates and columns of ice sparkling in the morning air, a form of ice for known as diamond dust.

These optical effects were particularly bright and clear on the morning Tracy spotted them, and they were also joined by a much rarer effect, a supralateral arc, which can appear as an enormous bow across the sky. For this to appear, the sunlight needs to shine through hexagonal-column ice crystals. The light rays forming the effect enter in the ends of the crystals and emerge from one of the side faces. It is very rare to see a supralateral arc across the whole sky like this. Usually only fragments appear. “I was so excited, I didn’t feel the cold,” Tracy remembered. “I was late for work, but luckily I have an understanding boss – my husband, LOL.”