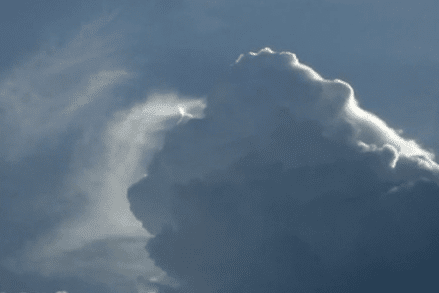 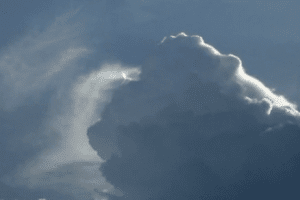 This video of the light effects was filmed over Florida, US

Several members have alerted us to a growing number of amateur videos recording strange shifting light effects appearing above Cumulonimbus storm clouds. These dancing patches of brightness appear to be caused by the cloud’s charged water particles moving around in response to shifting electric fields as lightning strikes within the cloud below.

Different theories about the exact cause of these effects have been going around the Internet. A NASA website reports the hypothesis that these effects are when ‘a lightning discharge can cause a sundog to jump’. By ‘sundog’, they are referring to the ice-crystal optical effect also known as a ‘mock sun’ or ‘parhelium’. Here is what NASA’s Astronomy Picture of the Day website said:
http://apod.nasa.gov/apod/ap111108.html 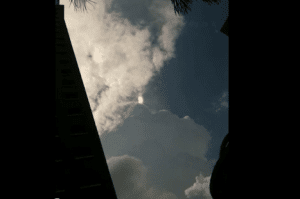 The same effect, witnessed over Singapore

It seemed to us very unlikely that these strange, shifting reflections of the light could have anything to do with sundogs. In a attempt to find out more, we decided to contact the one Cloud Appreciation Society member who knows most about light effects in the atmosphere: Les Cowley, Member Number 0014, of the fantastic Atmospheric Optics website.

Les took issue with the NASA website explanation, claiming that it is very unlikely these effects are caused the sort of ice crystals that produce sundogs. You just don’t tend to find the right type of ice crystal at the top of Cumulonimbus storm clouds. But if they aren’t moving sundogs, when what are they? “We do not really know what is happening,” Les admitted. “We need more hard evidence, more measurements and cloud-physics modelling before we can hope to come up with a clear explanation. At the moment, we are nowhere near that position.” 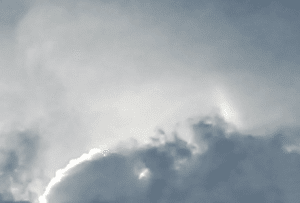 And here they are over Batu Pahat, Johor, Malaysia

If scientists need more examples, then surely us cloudspotters are the ones to help. We may not be able to provide physical measurements, but we can surely come up with a few more YouTube vids, can’t we? Anyone who manages to capture another video of one of these beautiful and mysterious dancing storm-cloud light effects can submit it for inclusion on our ever-expanding Cloud Videos page. The first to send a new on in will win a special society prize in recognition of their efforts to help reveal the mysteries of Cumulonimbus, the King of Clouds.