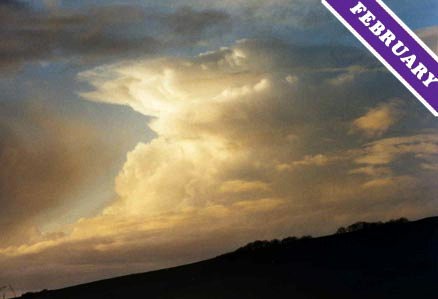 This proud cumulonimbus is the King of Clouds. Stretching around ten kilometres into the sky, he harnesses the power of ten Hiroshima-sized bombs. It is he – the tallest of all clouds – that we ultimately thank for the phrase ‘to be on cloud nine’, for he was originally classified as number nine in the list of cloud types published in the International Cloud Atlas of 1896. This proud fellow has taken on a beautiful anvil shape (known as cumulonimbus incus), as the ice crystals of his upper reaches spread out at the tropopause – the thermal lid to the region of atmosphere in which clouds mostly form. But don’t let his handsome chiselled features deceive you. He is a ferocious beast who’ll terrify young ladies with his thunder, lightning and hailstones.