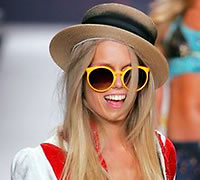 We can all breathe a sigh of relief – cloudspotting has got the thumbs up from New York’s fashion elite.

Vogue reports that Theodora Richards, international model and daughter of Rolling Stones legend Keith Richards, likes to kick back and look at clouds after a hard day wowing them on the catwalk.

Theodora, apparently known for her rock chic style and outgoing personality, would even like to join our society, but seems to be having problems.

She told the magazine: “I’ve been trying to become a part of The Cloud Appreciation Society.

“This eccentric Englishman and his wife have begun this society and you get your number and you send in your pictures of what you’ve seen in the clouds and if it’s a really decent picture, you can have it put in a book.”

Yep, that’s a fair description Theodora. And if you’re still having trouble, here’s a handy link to our membership page.