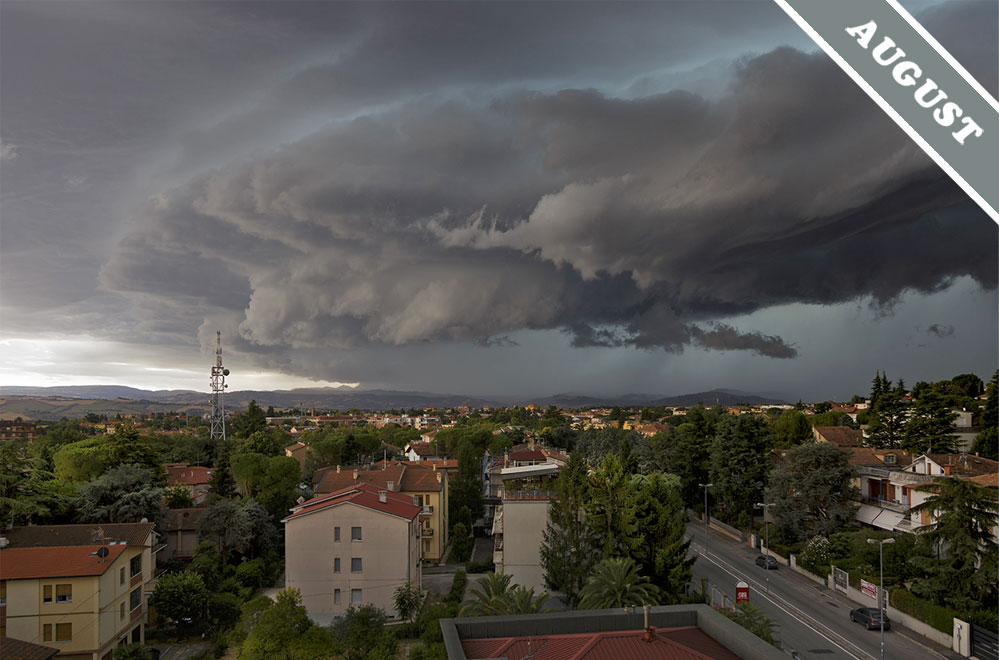 The formation known as a ‘shelf cloud’, or ‘arcus’, is the part of a storm cloud that arrives just before the deluge begins. It is a cloud ‘supplementary feature’, which means it’s a distinctive form that is attached to one of the main cloud types – in this case, the mighty Cumulonimbus storm cloud. Arcus is the Latin for an arch, and it is a sensible name because this low ridge of cloud tends to have an arched appearance when viewed head-on due to the effect of perspective. The ‘shelf cloud’ name, on the other hand, is a rubbish one. It causes considerable confusion among cloudspotters, who assume it refers not to this low ridge at the front base of the storm but to that other distinctive feature of a Cumulonimbus cloud: the huge anvil extending out at the very top.[/vc_column_text][/vc_column][/vc_row][vc_row row_type=”row” use_row_as_full_screen_section=”no” type=”full_width” text_align=”left” background_animation=”none” css_animation=””][vc_column width=”1/2″][vc_column_text]This high canopy of cloud, which projects ahead of the storm up towards the top of the troposphere, is known as the ‘incus’ after the Latin for a blacksmith’s anvil. When you are viewing the storm cloud from a distance away, this incus part does tend to look like a shelf. Hence the confusion.

So here’s the cloudspotting rule. If you are some distance from the storm, perhaps 30 miles / 50 km, and you see a high broad canopy extending out at the top, this is not a shelf cloud, it’s the Cumulonimbus cloud’s anvil, or incus. It forms as the building cloud encounters the invisible ceiling to cloud growth that is the top of the troposphere and so can only spread outwards. If you are close to the storm, the shelf cloud, or arcus, is the low ridge that looks more like a car’s bumper, or fender, and it visible just ahead of the heavy showers. This low, dark, sometimes ragged ridge of cloud is formed as the cold air dragged down with the storm’s precipitation splays out at ground level, burrowing beneath the warmer air ahead. The high one looks more like a shelf, but isn’t called a shelf, and it tells you the storm is a long way off. The low one doesn’t look much like a shelf, but is called one, and it says you’ll drenched in a matter of minutes.[/vc_column_text][/vc_column][vc_column width=”1/2″][vc_single_image image=”225204″ img_size=”full” add_caption=”yes” onclick=”custom_link” img_link_target=”_blank” qode_css_animation=”” link=”/gallery/photo/photo-n-203394″][vc_empty_space][/vc_column][/vc_row][vc_row row_type=”row” use_row_as_full_screen_section=”no” type=”full_width” text_align=”left” background_animation=”none” css_animation=””][vc_column][vc_column_text]Arcus, or shelf cloud, ahead of the showers of a Cumulonimbus storm cloud spotted over Jesi, Marche, Italy, by Giampiero Barchiesi.[/vc_column_text][/vc_column][/vc_row]