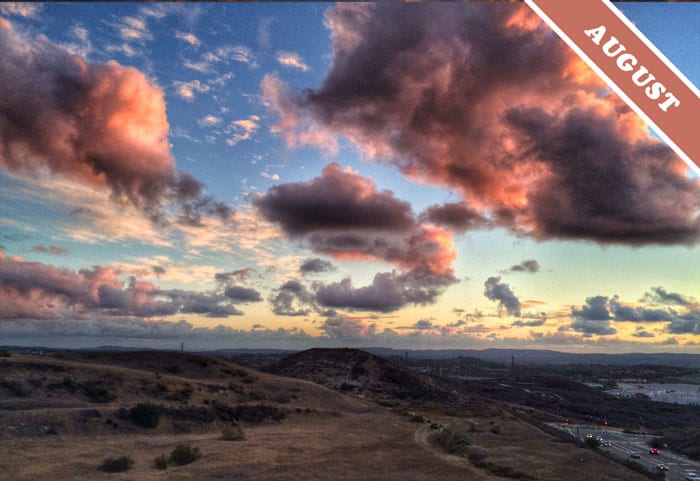 Close your eyes, think of a cloud, and it’s probably a Cumulus that comes to mind. It’s the familiar, lighthearted, fair-weather cloud that is borne on thermals rising as invisible columns of air from the sun-warmed ground. Small Cumulus, like these spotted by Marc Librescu over Portola Hills, California, are described as ‘Cumulus humilis’, the Latin for ‘humble heaps’. They are short-lived, tending to dissipate away at the ripe old age of 10–15 minutes.

The water droplets in Cumulus are particularly small and plentiful, which explains why this cloud looks more solid than the other types. The droplets, being so small and close together, scatter the sunlight more readily than the larger, more spaced out droplets or ice crystals in other clouds. As a result, less of the sunlight passes through a Cumulus making it appear brilliant white on the side lit by the sun and dark on the side in shadow.

Since Cumulus are formed by the heat of the sun they tend to appear during the morning. At the day’s end, when the light of the low sun has turned ruby red, they thin, break up and dissipate away once more. There are many dramatic and unusual cloud formations vying for our attention, but cloudspotters should never forget to appreciate the simple pleasures of an everyday Cumulus.