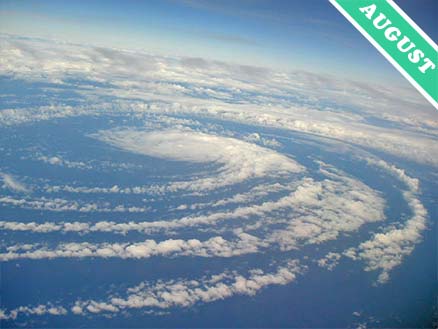 (Click image to enlarge) Photographed over the Cook Inlet, southwest of Anchorage, Alaska, US © Barbara Bundy. See this photo in the Cloud Gallery here.

We are used to the swirling masses of cloud on those satellite photographs of storm systems. As the winds flow in towards the centre of the storm, they develop into an enormous rotating pattern simply because they are passing around the surface of a rotating sphere – the Earth. The spin of our planet causes storms to rotate in different directions in the Northern and Southern Hemispheres: they go anti-clockwise in the north and clockwise in the south.

Cloudspotters might therefore assume that the swirling pattern of clouds in this fine photo, taken from a plane off the coast of Alaska, is just such a storm system. They would, however, be wrong, for these aren’t the deep, furious Cumulonimbus clouds that form the cells of a storm. They are in fact just shallow, innocuous clouds, known as Altocumulus. Nor is this pattern spinning on account of the Earth’s rotation. The cloudy swirl here is due to something much more localised: an island in the path of the wind.

Anyone who has contemplated the undulating surface of a babbling stream will know that, as the current parts to flow around a small stone, it can develop a succession of tiny eddies. Each of these swirls, known as ‘Kármán Vortices’, rotates the opposite way from its neighbours. Lined up in a beautiful procession of weaving curls, they look dancers in a Scottish reel.

Exactly the same Kármán Vortices can form on a much, much larger scale within the atmosphere, as winds part to pass around an island rising from the sea. This month’s photograph is in fact a rare record of one such atmospheric vortex, in which the winds spin with gay abandon in an island’s wake. The dance would, of course, be invisible were it not for the Altocumulus clouds. They can never resist the wind’s energetic embrace, and so follow every graceful twirl of its Highland dance in the sky.