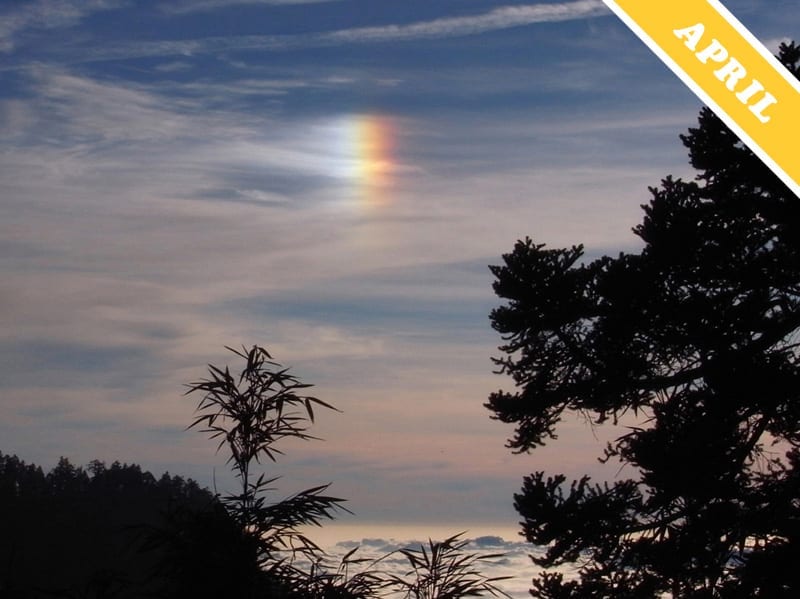 Every Sundog Has its Day

Also known as ‘mock suns’ and ‘parhelia’, sundogs are large spots of light that can appear on one or both sides of the Sun. They appear on about 70 days of the year in mid-latitude regions of the world, and are formed as sunlight is refracted through the ice crystals of thin layers of high clouds, such as Cirrostratus, Cirrocumulus and Cirrus, as is the case in April’s Cloud of the Month. Like all the ‘halo phenomena’ produced by sunlight shining through ice clouds, sundogs can also appear in ground-level ice-crystal cloud known as diamond dust.

These spots of light appear level with the Sun, and at a distance away from it that’s equivalent to the outstretched span of a hand held up at arm’s length. Sundogs are brightest when the Sun is low, and only generally visible when it’s lower than 40˚ above the horizon. They generally appear orange and red on the side nearest to the Sun, because of the way the wavelengths of sunlight are separated by tiny ice-crystal prisms of the cloud.

Cloudspotters should learn to recognise the sort of sky that produces sundogs and other halo phenomena. This is when the blue first begins to pale with subtle wisps and milky patches of the ice-crystal clouds. The clouds must be thin for the light effects to appear. Once they’ve grown thick enough and white enough to be noticed by the general riffraff, the sundogs will have silently slipped away.