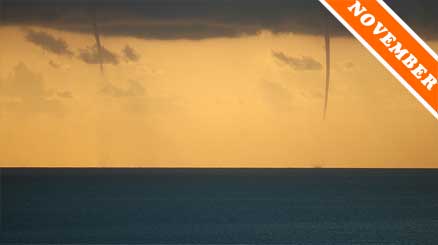 A ‘tuba’ is when a cloud extends a finger towards Earth. Young children often yearn to reach up and touch the soft mounds of a fair-weather Cumulus. So who can blame a cloud for wanting to know what the ground feels like?

It does have to get worked up into a vigorous spin, however, before it can summon the energy to do so. In and around the intense downdrafts associated with large Cumulonimbus and Cumulus congestus clouds, a vortex of swirling air can develop – like that of water draining down a plughole. The air in the center drops in pressure as a result of all the spinning, which can make it cool enough for some of its water vapour to combine into droplets.

Like the slender pair of swirling digits forming above, tuba are columns or cones of cloud extending down the middle of these vortices. They do not always end up reaching the surface, however. More often than not, the cloud loses heart before touching terra firma. Maybe it knows that, in another guise – on a different day – it will return as fog or mist, only to hug the ground until it is heartily sick of it.