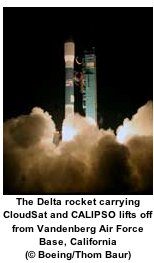 On 28th April 2006, two NASA satellites, called CloudSat and CALIPSO, were launched into orbit 438 miles above the Earth to get a better view of the clouds. Whilst this may sound like a rather expensive indulgence for the cloudspotters of the science world, it begins to make more sense when you learn that clouds are the wildcards in climate change.
Will a warming planet lead to more or less cloud cover? Will any changes in the amount and type of cloud contribute to, or lessen, global warming? The new satellites should help scientists’ quest for answers.
CloudSat will profile the clouds with an extremely sensitive radar to determine how much water they contain and whether this is in the form of droplets or ice crystals. It will help clarify basic questions about how clouds form rain and snow, as well as how they affect the Earth’s climate. CALIPSO will provide data about the amount of microscopic ‘aerosols’ in the atmosphere, such as man-made pollution, volcanic ash and mineral particles. These affect how the Sun warms the planet and also play a cruical role in cloud formation.
Finally, we might learn how clouds react to a warming planet.
To read more about CloudSat:
http://cloudsat.atmos.colostate.edu/home
To watch videos of the launch:
http://www.nasa.gov/mission_pages/cloudsat/launch/calipsocloudsat-allvideos.html