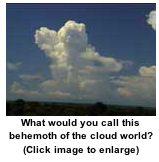 We always love a cloud with a name. This thunderstorm complex is well known by scientists interested in tropical meteorology, as it forms on a daily basis at certain times of year over the Tiwi Islands, off the north coast of Australia.
It forms on almost a daily basis during the transitional months of Nov-Dec and Feb-March, which makes it a perfect subject for meteorologists studying the development of Cumulonimbus clouds.
Mighty thunderclouds like this are estimated to harness the power of ten Hiroshima-sized bombs. Stretching up to 20km into the atmosphere, it is clearly visible from Darwin, over 100km away. We are very pleased that such an awe-inspiring and ferocious a monster as this has been christened by the locals with a name like Hector.
Many thanks to Tim Garrett for sending the photos in.

One thought on “The cloud called Hector”