September 7, 2006 In Attention All Cloudspotters 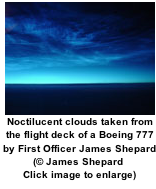 Conscious of increasingly frequent and wide-spread observations of Noctilucent clouds (see May’s Cloud of the Month), scientists have speculated as to whether this extremely high ice cloud is an aerial indicator of our contribution to climate change. Forming at altitudes of between 30 and 50 miles up, these clouds might be appearing more often due to increased levels of greenhouse gasses. But until we know how these mysterious clouds form and why they appear to be more common, all scientists can do is speculate.
That is about to change, however. NASA’s ‘AIM’ satellite, due to be launched later this year, should shed new light on this beguiling cloud formation.
More info about the AIM mission:
http://aim.hamptonu.edu/
More info about Noctilucent clouds:
http://science.nasa.gov/headlines/y2003/19feb_nlc.htm