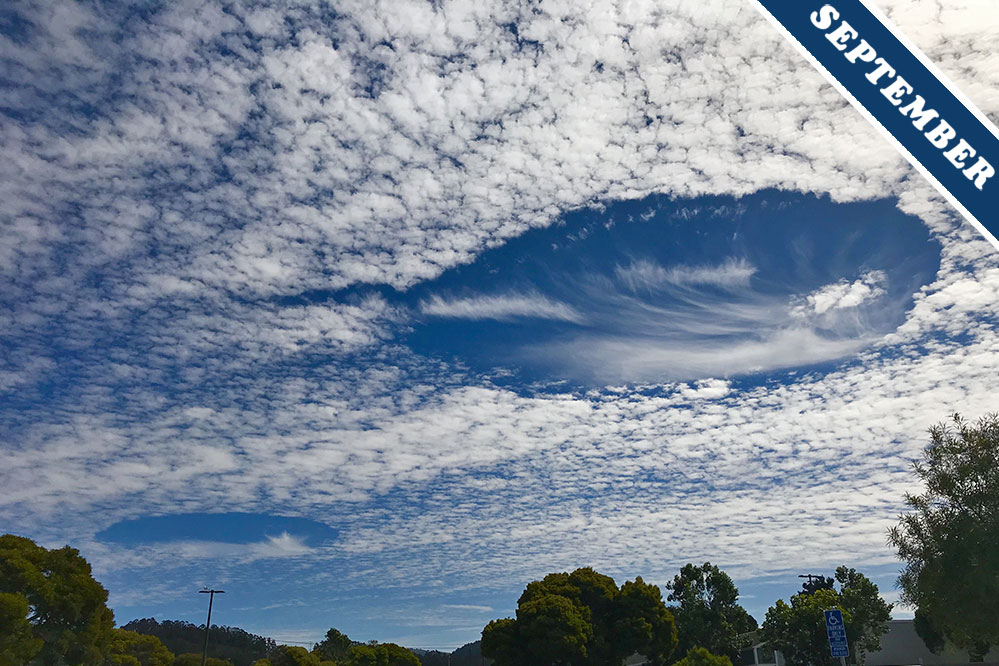 When it comes to freezing, water droplets suspended in the atmosphere don’t behave in the same way as a glass of water does down here on the ground. We are used to thinking of water freezing at 0°C / 32°F, but droplets up in a cloud rarely freeze until temperatures are much, much lower than that. The water molecules just behave differently when the water is very pure and is in the shape of minuscule suspended spheres. It’s not uncommon for the droplets in a cloud to be as cold as -20°C / -4°F and still resolutely refuse to freeze into ice crystals. Any cloud with ‘supercooled’ droplets like these is a perfect one to exhibit the formation known as a ’fallstreak hole’.

More officially called a ‘cavum’, this formation looks like an enormous cookie cutter has been taken to the sky. The large holes are either round or elongated into more of a cigar shape and they most typically occur in the mid- and high-level clouds Altocumulus and Cirrocumulus. When these consist of supercooled droplets, fallstreak holes appear when the droplets in one region of the cloud start to freeze, which sets off a chain reaction that spreads outwards. The developing ice crystals quickly grow in size, and they splinter as they do so, breaking into tiny shards of ice that act as more ‘seeds’ onto which the surrounding supercooled droplets freeze too. Once there are crystals of ice to get them started supercooled droplets have no hesitation in starting to freeze. As a result, a chain reaction develops and the freezing process gradually spreads outwards. The ice crystals tend to grow large enough to fall below, appearing as a graceful streak and leaving behind an ever-expanding hole in the cloud layer above.

What starts the process that leads to these cookie-cutter clouds? What causes a layer of supercooled droplets to start freezing in one particular region – or two, in the case of this example spotted over Half Moon Bay, California, US by Lincoln Allen (Member 45,136)? While the freezing can be set off naturally by some ice crystals falling down into the layer from a Cirrus cloud above, the far more common trigger for fallstreak holes is aircraft climbing or descending through the cloud layer. It is why fallstreak holes are most commonly spotted in the general region of airports. When conditions in the cloud are just right, the drop in air pressure within the turbulence around the aircraft’s wings further cools the supercooled droplets just enough finally to start the freezing process. Once it is underway, the chain reaction begins and the hole starts spreading. Whatever gets it started, a fallstreak hole can grow over the process of a couple of hours to more than 30 miles / 50 km across. Someone up there is eating some very big cloud cookies.