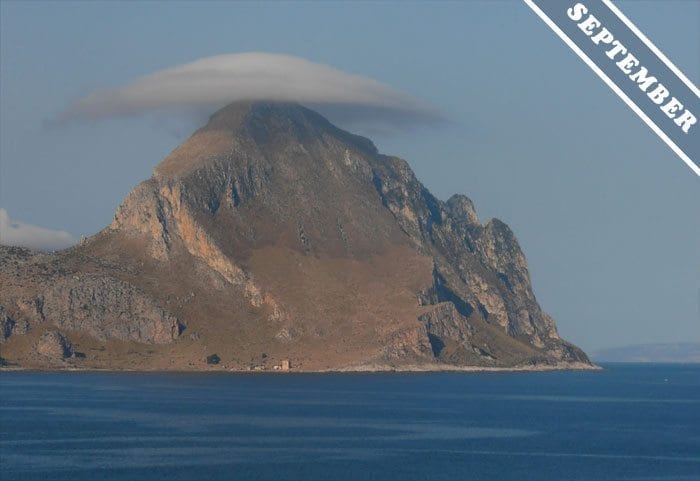 The cloud of the month for September was spotted by Sebastian Luciano Ferla over Monte Cofano in Sicily, Italy. Known as a ‘cap cloud’, it is the type that can sometimes be found floating jauntily over the top of a mountain peak. This cloud forms when a moist airstream has to rise to pass over the mountain. As it does so, the air expands and cools and, if the conditions are right, it can cool enough for some of its moisture to condense into tiny droplets, which collectivelly appear as a smooth dome of cloud.

There is an optical illusion at work in the appearance of a cap cloud like this. The cloud appears to hover motionless over the mountain peak even when the wind is brisk. In fact, the droplets of the cloud do zoom along with the wind. The reason the cloud seems stationary is because they all appear at the same point upwind of the mountain (where the air has cooled enough for them to form) and they all disappear at the same point in the lee of it (where the air dips back down and warms enough for them for evaporate away again). The cloud appears to be stationary as the droplets are flying through it. Only in the world of mountain cloud fashion, does a hat float magestically in place as a stiff wind whistles down the catwalk.