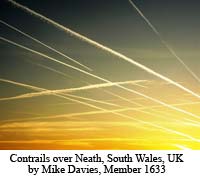 It is not everyday that you’ll find The Cloud Appreciation Society petitioning for FEWER clouds, but that is exactly what we have just done on a UK Government website.

We signed up to a petition urging the Prime Minister to take positive action to counter the increasing proliferation of aircraft condensation trails – the long man-made clouds that form behind high altitude planes.

There is a growing body of evidence to suggest that contrails result in increased levels of high cloud, which tend to trap in the sun’s heat, increasing surface temperatures in the regions they cover. Lower clouds have the opposite effect – of reflecting away much of the sun’s radiation. Indeed, the effect of all cloud types taken as a whole, seems to be a cooling one. The tendency of contrails to spread out and lead to increased levels of high, ‘cirriform’ clouds is in danger of distorting this effect.

Aircraft do not always need to fly at contrail-producing altitudes. It might be possible to limit cruising altitudes with air-traffic ceilings based on the atmospheric conditions, in order to reduce the effects of cloud formation without overly increasing fuel consumption. Organised by Shabra Dowson, the petition states:

“We, the undersigned, petition the Prime Minister to seriously consider using air-traffic management to keep European aircraft outside of contrail-forming regions of the atmosphere. Reducing contrails would bring an immediate reduction in high clouds with a corresponding immediate decrease in global warming.”

We encourage any members and visitors who are UK citizens to add their names to the petition and call for measures to reduce these man-made clouds. Over 200 names on the list by October 2007, and the govenrment will have to give a response.