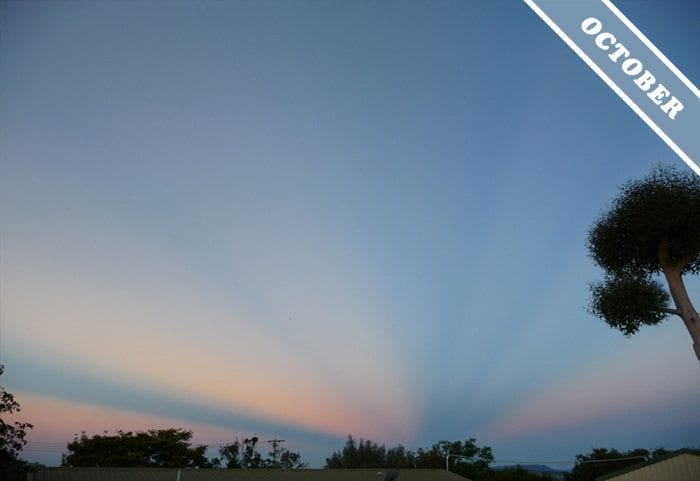 Cloudspotters are often to be found gazing wistfully to the west as the dying rays of the setting sun drop behind Cumulus towers on the distant horizon. Sometimes, however, they’d be wise to turn their back on the sunset altogether. This is because the more surprising and unusual display can occasionally be found in opposite direction to that of the sun. It is the rarely-observed formation known as ‘anti-crepuscular rays’.

Anti-crepuscular rays are like an inverted version of the more familiar crepuscular rays that shine like searchlights through Stratocumulus and cloud formations. They are long lines of shadow that stand out against a brighter sky, and appear to converge on horizon away from the sun. The example here, photographed by Sally Agnew over Warwick, South East Queensland, Australia, shows the shadows from clouds to the west projected onto a subtle, milky layer of Cirrostratus clouds to the east. The shadows, which are actually pretty much parallel, appear to converge due to perspective effects.

So next time you find yourself admiring a glorious sunset, remember to check behind you. You might be missing the opportunity to add a rare and beautiful optical effect to your cloudspotting collection.