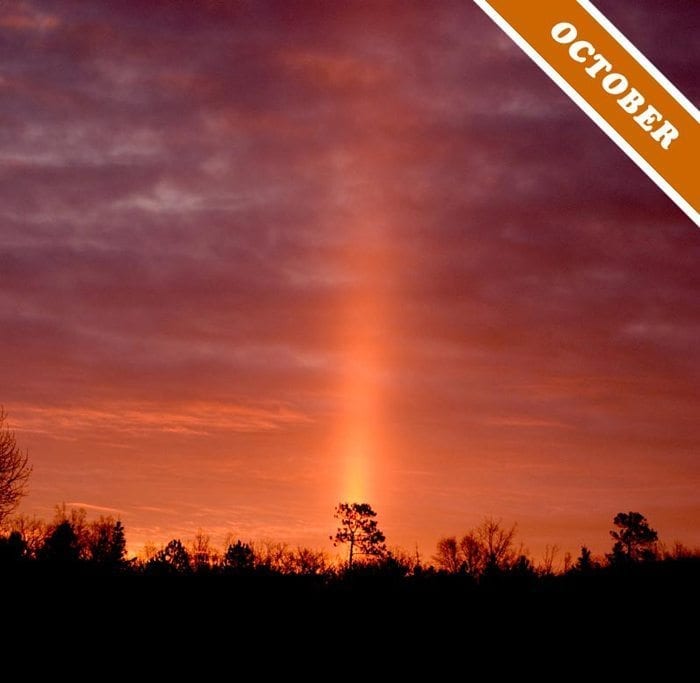 Sun pillars are vertical streaks of light that appear above and below a low Sun as it shines through clouds that contain ice crystals, such as the Altocumulus clouds shown here. At night, they are known as moon pillars.

The optical effect is one of the ones that are collectively described as ‘halo phenomena’, and appears on about 25 days of the year over Europe. Sun pillars are caused by the sunlight reflecting off the surface of the ice crystals. So they are rather like an aerial version of the ‘glitter paths’ that appear below the bright sun on the surface of the sea, but it is the faces of tumbling ice crystals that cause the reflections here, rather than then rippled peaks on the ocean. A pillar extending above the Sun like this fine example, spotted over Lively Ontario, looks brightest when the Sun is just below the horizon.

Most of the other the arcs, rings and spots of light that are called halo phenomena only appear when the clouds’ crystals are optically pure, regularly shaped and neatly aligned. But this is not the case for sun pillars. They are like a poor man’s halo phenomenon, for they appear when cloud crystals aren’t so exquisitely refined. Since the sunlight needs only to glance off a surface of the crystals, they can be rough, irregular and jumbled.