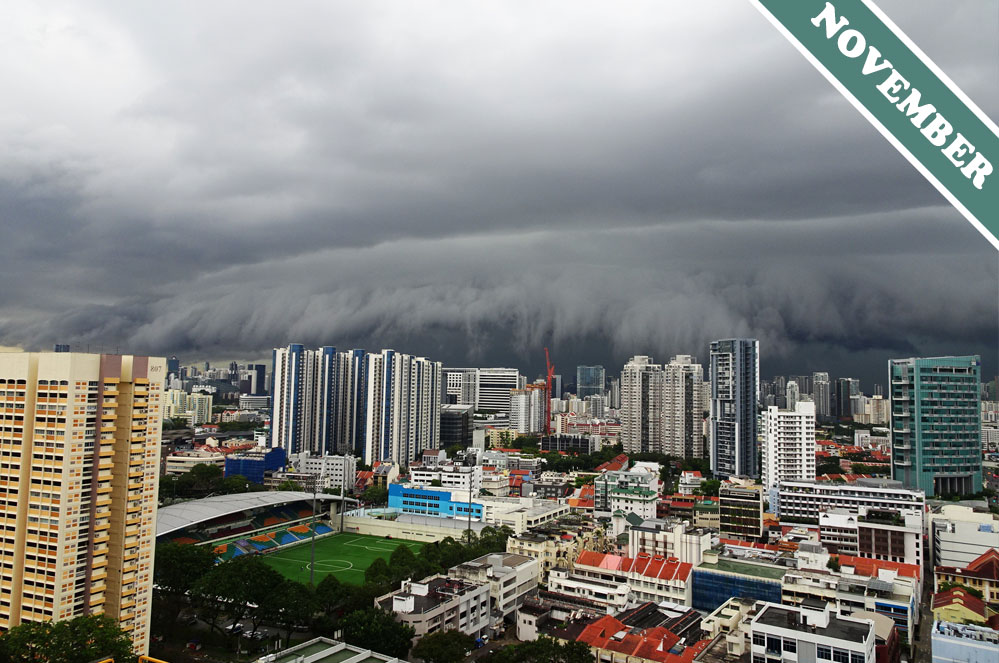 On November 2nd, the low ragged form of an arcus cloud swept like an ocean inundation over the skyline of Singapore. Spotted here by Sohil Pothiawala, the ominous cloud feature appeared just ahead of a powerful storm that caused flash flooding and fallen trees across the city-state. An arcus, which is also known as a shelf cloud, is like the front base of a Cumulonimbus storm cloud, for it forms just ahead of the storm’s heavy showers. Sometimes the cloud feature appears as a smooth roll. Other times, as with this one over Singapore, is has a more ragged appearance. Either way, it’s a warning of the weather to come.

Why would this distinctive ridge of cloud appear ahead of a storm’s showers? Watching an arcus appear in time-lapse video gives a clue. Sohil filmed a time-lapse of the arcus cloud’s dramatic appearance in the Singapore sky. The cloud’s movement was so fast that it is just as dramatic in the real-time videos filmed by other residents. The videos show how the cloud lifts as it advances. This lifting movement is characteristic of an arcus cloud, and it is a clue to what causes the dramatic cloud to form.

Any huge downpour like the one that drenched Singapore has the effect of dragging down air with it. The falling precipitation of the storm causes a massive downward flow of air, which it drags from high in the cloud right down to the ground. The rain lands on the surface, but the downdraft of air can only splay outwards. Some flows out ahead of the storm’s advance. This outflowing air is what causes the lifting you can see in videos of arcus clouds.

The air in the outflow is cold because it was dragged down from high up in the cloud. This means it is denser than the warmer air near the ground that it pushes out of the way ahead of the storm. Therefore the cold outflow burrows beneath the less dense, warmer air, lifting it like someone burrowing beneath a duvet. The warm air near the ground often carries a lot of moisture, and so cloud droplets condense as it lifts and cools. The droplets appear as the arcus cloud, its features always lifting at the front, ahead of the dark showers, as the storm advances.

An arcus is the five-minute-warning cloud. It’s a tsunami of the sky, which forewarns all cloudspotters of the deluge that is about to arrive.

Arcus cloud feature ahead of a Cumulonimbus storm system spotted from Kallang, Singapore by by Sohil Pothiawala.

Sohil Pothiawala filmed a time-lapse video of the arcus cloud advancing over Singapore.

‘TheGlobalrisktaker’ filmed it in real time from a different angle.